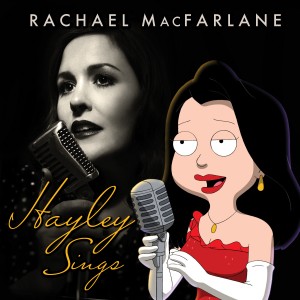 Rachael MacFarlane is best known because of her famous last name (her brother is Family Guy creator Seth MacFarlane) and various voiceover roles; few have been aware of her singing chops, at least until now.

On “Hayley Sings” (Concord), she runs through a series of jazz standards backed by a big band, including “Makin’ Whoopee” and “Someone To Watch Over Me,” which she nails with the expertise of a weathered torch singer. However, the most interesting moments come with tunes less conventional in the songbook of standards, such as the lovely rendition of Paul Simon’s “Feelin’ Groovy,” which she sings with a more subtle approach with the backing of piano, string bass and drums. That is repeated with The Beatles’ “All My Loving,” which is played as a ballad and suddenly breaks into the hidden track “Secret Agent Man,” which is played with a full rock arrangement.

Other songs don’t work as well. For instance, the Latin take on “Do You Wanna Dance” doesn’t seem to work in spite of the great arrangement (the Spanish vocals by Rafael Ferrer don’t make it sound legit), and “One Fine Day” seems a bit rehashed. But MacFarlane has honest delivery. Clearly aware of her limitations, she doesn’t try to overcome–and that is a good thing. (Ernest Barteldes)