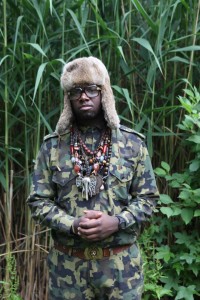 Matching the lunacy of Kool Keith rhymes, Tha Alkaholiks penchant for boozy word play and occasional Cudi-style sing-alongs (but not too many), Mr. Muthafukin’ eXquire’s “Lost in Translation” arrived last year only to be overshadowed by gimmicky newcomers and a slew of genre luminaries issuing work after being sprung from the clink. Joined by folks like Jake One, El-P and Esoteric, eXquire doesn’t ever lack proper musical backing to discuss the finer points of getting wasted, exploiting your girlfriend and proclaiming his love of breast milk. The MC even takes the time to expound on his affection for fried chicken and all the sides he can snag to make a meal. “Chicken Spot Rock” sounds vaguely familiar, though. But since El-P’s aboard, contributing beats and rhymes, it’s not a revelation that some of the more adventurous productions here make use of moods that seem stripped from his (can we say classic?) Cannibal Ox project. In addition to that chicken track, tucked in to eXquire’s release, is a cut toward the end of the disc detailing the necessity to tailor-make a proper companion. It’s another recycled beat from El-P’s past. Thing is, the producer’s work is so unique, it doesn’t sound stale. And with eXquire’s ability to adapt to various musical settings—and add in more lines about “sucking we-wes”—the whole thing sounds like a new offering. Even if the music, accompanying rhymes and stories weren’t cartoonishly entertaining, hearing vocal samples from God knows where about cockmeat sandwiches should be enough to draw in fans of defunct NYC labels like Fondle ’em and Rawkus. Thankfully, there’s a lack of preachy political stuff. And that might be a bonus, ’cause really, who needs to consider national concerns when there’s a track about actor/ninja Michael Dudikoff. (Dave Cantor)