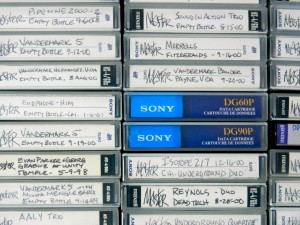 Imagine getting a glimpse of your favorite band’s entire career, from their earliest output to their most famous work, with detailed liner notes accompanying more than two decades of recordings.

That’s how Allison Schein describes the Malachi Ritscher Collection, an archive of more than 4,000 unique live recordings of Chicago’s experimental and improvised music scene. Schein is the archive manager of the Creative Audio Archive, an initiative of the Experimental Sound Studio that launched a recently successful Kickstarter campaign to preserve the late Ritscher’s personal library.

“It is the most complete documentation of what was going on in a very important music scene,” Schein says.

From 1981 until his death in 2006, Ritscher–who committed suicide by self-immolation to protest the war in Iraq–was a fixture in the Chicago music scene, often spending four or five nights a week recording musicians such as Ken Vandermark, Kevin Drumm, Hamid Drake, Jim Baker and Michael Zerang. Ritscher’s recordings capture not only the musical evolutions of many Chicago artists, but also their collaborations with musicians from around the world who came to Chicago to play with them.

“He documented one of my most prolific times of playing in Chicago,” guitarist Jeff Parker says. “Every time I played at the Empty Bottle, every time I played the Hungry Brain, lounge acts, Tortoise gigs. The guy recorded probably a dozen shows a week around town. He’d record two or three different things every night. He worked the graveyard shift at a hospital, so he would record shows and then go to work at 3am, work all night, sleep all day and find time to edit all of this.” 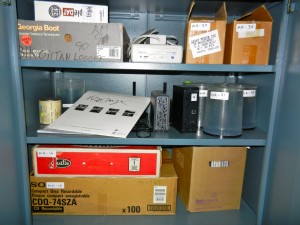 Ritscher meticulously annotated his collection with track times, featured artists, venue locations and any digital alterations he made to the recordings. Upon his death, Ritscher willed the collection to Bruno Johnson, the head of free jazz label Okka Disk, who then donated it to the Creative Audio Archives in 2008. It wasn’t until last year that Schein realized the condition of the digital audio tapes, despite their extensive documentation, was deteriorating.

Normally corporations and granting agencies help fund the Creative Audio Archive, but the Ritscher project didn’t receive any financial support. Unlike other types of archives that could recruit volunteers, digitizing the tapes requires a trained audio engineer, so Schein turned to crowd-funding website Kickstarter to raise the money.

“The response was overwhelming,” she says. Launched in mid-September, the Kickstarter campaign set a month-long deadline to raise $5,000 to cover the costs of preservation. Within a week, the project had already raised more than half of its funding goal. Halfway through the funding period, the project had not only met its goal, it exceeded it with hundreds of dollars to spare.

“I’m not surprised that it didn’t have trouble reaching its goal,” says trombonist Jeb Bishop, whose own performances are included in the collection. “Anyone who is a fan of this music will realize the importance of the archive.”

Once the tapes are transferred, Schein says the Creative Audio Archives hopes to partner with restaurants, libraries and record stores to install free pop-up listening sessions across the city to share the music with the public. It’s an opportunity to explore a landmark period in Chicago’s music history, as well as Ritscher’s contributions.

“He was as much a part of the scene as any of the musicians,” Bishop says. (Nolan Feeney)