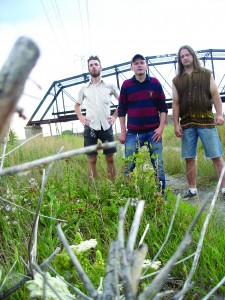 Earning the opportunity to issue music through imprints like Permanent Records, Plus Tapes and La Société Expéditionnaire, it’d be expected the band has amassed significant attention around the city. It hasn’t. But what brought Mako Sica to the attention of those label honchos is a genuine desire to dash its music with monkish moans and skittering guitar, all supported by intuitive percussion.

The band’s latest offering, “Essence,” sports three extended tracks, including a studio version of “Fate Deals a Hand.” The track, which was initially released on a tape simply called “Live at the Subterranean,” is drawn out a bit in its latest incarnation. But the composition also takes on a lighter tone on the newer recording. Fuscaldo says the track’s studio realization came at a time when the trio was properly prepared to get it down on tape. As a living organism, “Fate” groans in and out of its various sections, vaguely jazzy noodling heaped atop of Kendrick’s free-drumming while Drazek’s trumpet inspires visions of Miles cooling out, slumped over with shades on.

It’s on the version opening “Essence” that Mako Sica more easily approaches a shamanistic vibe, something that’s spread out over the course of its recorded career. Here, Fuscaldo harmonizes with his bandmate’s guitar coloring, bells and sundry percussive noises, making the music seem fitting for play at a monastery or any one of Chicago’s DIY venues.

Newcity: Passages of your music seem fully improvised. And since it’s mostly instrumental, how do you guys wind up titling works?

Brent Fuscaldo: It depends on the song. Each of us, we have different ideas about what the particular compositions mean. And different band members bring in titles, but it might be a thematic idea or based on how the music makes us feel. It’s a pretty democratic process, and it takes a pretty long time for us to write something. Our music, if somebody just heard it, they might just think that it’s improvised. Our music’s all written out—not on paper—but we compose it in our heads over months or years. It’s all memorized, and it’s a map the three of us have. A lot of times, titles become a literal stamp on something that’s not really literal, like a painter titles a work after a scene. Sometimes there’re stories.

Further complicating an understanding of Mako Sica’s impressionistic work is the band refusing to aim at making music a full-time endeavor. Fuscaldo says he and his bandmates don’t think of Mako Sica as a career—it’s a passion.

Several years back, when Southern Records distribution was still housed on the corner of West Fullerton and North Western, the business unsurprisingly employed a number of folks engaged with the local music scene. At one point, it counted both Fuscaldo and Drazek among its ranks. 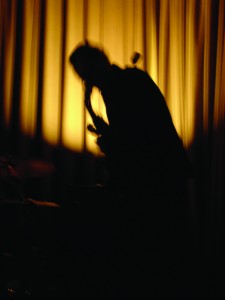 Between a modest view of their craft and the fact that each member’s played in numerous bands over time—most notably, Drazek and Kendrick performing in Rope—Mako Sica hasn’t done significant time on the road: Two East Coast treks in the past several years with a West Coast swing slated for later in October.

Do you think your perspective on the band is born of being based in the Midwest?

I think there’s something magical about the Midwest and Chicago…because seasons are so extreme. In the winter, if people are artists, they have time to do whatever they feel compelled to do—put the brush to canvas or, in our situation, we can go into the practice space and do a lot of writing. When everything clears and it’s actually time to show, we have this thing… As far as the frequency of our touring, it’s probably the place that we’re at—we’ve all been in bands before. We’re more relaxed and make music because we like making music.

Lou Rogai, who heads up La Société Expéditionnaire as well as playing in the folksy Lewis & Clarke, knew Fuscaldo from working with Southern. But it was the guitarist’s genuine appreciation for ringing out some original work from a traditional instrument that endeared him and Mako Sica to the Pennsylvania-dwelling label boss.

“[Fuscaldo] sent me rough demos of their early work, which I found myself captivated by,” Rogai said in an email. “In 2008, Lewis & Clarke first shared a bill with them at the now defunct A/V aerie. What we experienced there was Mako Sica’s ritualistic incantation of primal truth. They seemed to invoke a darker, more frenzied version of what we were experimenting with.”

Mako Sica making Chicago home may account for its specifically honed take on rock and jazz. But it’d be just as easy to credit the players’ backgrounds, spent strewn across the country and across the globe, for the band’s varied influences.

I know you’re from the South, but where’d you grow up, and how’d you wind up in Chicago?

I’m from North Carolina… I was born in Georgia and lived in Pennsylvania, but moved back to the South when I was in elementary school… I always listened to a lot of music that came out of Chicago and admired it from a distance. When I was in high school, I was into a lot of stuff on Touch and Go—and of course, Thrill Jockey. I’m gonna date myself—it was before the Internet, and I always looked up to Chicago—what is this mysterious place? …There was something unique about all those labels and distributors.

I got a job working for the American Red Cross as part of the AmeriCorps program. …But I just appreciated the music community here, and I’m still humbled by it—it’s even greater than I thought.

Taking in the breadth of work represented on any of its releases, Mako Sica relates an unrealistic variety of influence. “Red Rivers,” from the 2009 “Mayday at Strobe,” turns in a Jamaican-inspired passage not too many bands would be capable of expressing amid an offering concerned with exploring the possibilities of slowly developed melodies and distant, hazy vocal cries.

In its music, Mako Sica belies any sort of wide-eyed, surprise at its surroundings. There’s no way to hear the sort of apprehension people believe newcomers to a major metropolitan area feel. The three men who make up the band are at once representatives of their respective cultures and exemplars of Chicago’s creative spirit. New blood and ideas always push forward the impulses of a community. And while this trio’s called the city home for a while now, its varied heredity contributes to the scene’s exploration of what an immigrant nation sounds like.