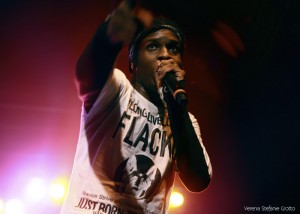 Listening to A$AP Rocky’s year-old debut mixtape “LiveLoveA$AP” is like traversing a zero-gravity realm where snapshots of the rapper’s day-to-day life are projected on all sides in black, white and gold and set to music created at the bottom of the deep. He raps conversationally about being who he is, wearing progressive yet inexplicable clothing, having sex with various women knowing full well they have boyfriends, and confronting those boyfriends earnestly (“Oh that’s your girl huh?/ Well I just hit it/It’s A$AP nigga/ live with it”). Every now and then, an ulterior voice steps in, deep and drawled, and you see a close-up of him taking a swig of purple liquid from a Dixie cup.

With a roster of producers like Clams Casino and A$AP Ty Beats, the beats themselves uphold a unifying quality, like they very well could’ve been created to be the soundtrack at the Shedd Aquarium. Spacey-sounding electric-organ riffs balanced with a mild drum-machine pulse become even stranger when synthed-out Native Americanesque wooden flute or toy-piano loops dither in and out like the ghosts of a frightened child. Like so many before him, A$AP Rocky has followed hip-hop’s recipe of borrowing something already done and using it to make his own flavor of rap. He openly admits to being influenced by Houston’s underground chopped and screwed sound and Lean (a cocktail made by mixing liquid codeine and promethazine with purple soda) sipping culture of the early nineties.

We saw mainstream hip-hop embrace the slurred and slowed-down style back in 2004 when Mike Jones’ infectious “Still Tippin’” made it to number one, and suddenly every Southern rapper (and some from other regions as well) took the hook and slowed it down per quarter note. Despite critics’ incessant practice to point out the obvious (it’s been done, we get it) A$AP Rocky could care less. He has been skimming the perimeter of the mainstream circle since his mixtape earned notoriety on New York’s premier hip-hop station HOT97. His first recorded studio album, “LongLiveA$AP,” is set to release sometime this November and could potentially catapult him onto national airwaves. (Jessica Burg)