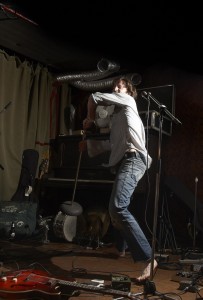 Formed by two Slumberland alums, Sic Alps began an ambitious career by issuing an unrealistic number of singles over the course of its first few years in existence. The torrid release schedule allowed the band to get some of its more verbose moments on tape while simultaneously readying the troupe for long-form endeavors. The rough edges, though, were pretty much the focus of 2006’s “Pleasures and Treasures.” Amid the purposefully difficult moments, snatches of melody bleed through—even if it’s at a deafening volume—as on “I Am Grass.” Saying Sic Alps refined its sound for the Siltbreeze-issued “U.S. EZ” is like saying that sanding rust off a pickup truck makes it a new vehicle. But for its Drag City debut, Sic Alps added Noel Von Harmonson, which could account in part for a great focus on melody and bolder sixties psych inclinations. “Do You Want to Give $$” ranks among the better tracks contemporary bands have been trying to shake loose from their collective understanding of “Nuggets”–era schlock. But it’s not as if the Bay Area troupe suddenly took note of the broad and growing affection for simple pop disguised with a dash of weirdness and decided to more fully focus on that strain of its music. Since the band started issuing work during the last decade, it’s been easy to grasp appreciation of Syd, the Floyd and Skip Spence expressed in Sic Alps’ sometimes unfocused music. On any given album, the band’s likely to include a few tracks focused on lilting vocals and hippie guitar strumming. And its latest, self-titled disc—which includes works like “Lazee Son,” a track that recounts the sleepy adventures of a prodigal kind in a vaguely British accent—is good enough to play for your acid-damaged relatives at family get-togethers and your too-hip friends. (Dave Cantor)