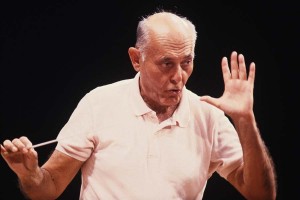 When former Chicago Symphony Orchestra music director Sir Georg Solti turned eighty in 1992, the British Royal Family threw a surprise birthday party for the legendary conductor at Buckingham Palace. The highlight of the bash was a performance by a chamber orchestra made up of players from all over the world from various orchestras that Solti had conducted, including the CSO.

That hope gave birth to the extraordinary idea: creating a World Orchestra for Peace to perform for a special concert made up of world leaders to celebrate the fiftieth anniversary of the United Nations in Geneva in July of 1995.

Solti himself made a list of the best players across the world’s orchestras to participate and much to his amazement, every invitation was accepted. That first concert was conducted by Solti and was broadcast live via satellite radio as well as recorded for television broadcast and was an enormous success.

A second World Orchestra for Peace concert had been planned for 1998 but Solti died suddenly in the fall of 1997. Solti’s longtime assistant Charles Kaye asked Russian conductor Valery Gergiev to conduct the concert and Gergiev was so enthused by the experience and the cause that he and Kaye, together with Solti’s widow Lady Valerie Solti as patron, kept the World Orchestra for Peace flame alive and it has been rekindled for special occasions in various countries since. In 2010, UNESCO even made the orchestra an Artist for Peace in recognition of its efforts.

This Sunday, October 21, on what would have been Solti’s one-hundredth birthday, the World Orchestra for Peace is reassembling in his honor and, for the first time, will be performing in the same hall where Solti had led nearly a thousand concerts as CSO music director and music director emeritus. 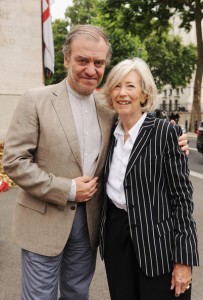 The repertoire performed is all heavily associated with Solti and includes the Overture to Mozart’s “The Marriage of Figaro,” Richard Strauss’ “Don Juan,” the “Adagietto” from the Mahler Fifth Symphony and a work by Solti’s ex-teacher and fellow Hungarian that was also conducted by Solti at the inaugural World Concert for Peace Orchestra, Bartók’s Concerto for Orchestra.

Romanian soprano superstar Angela Gheorghiu, whom Solti conducted in a stunning “La traviata” late in his career, will be performing “Addio del passato” from that opera and German bass and frequent Solti collaborator René Pape will sing “In diesen heil’gen Hallen” from Mozart’s “The Magic Flute.”

Both Gheorghiu, Pape as well as alumni musicians of the Solti Accademia and Solti Foundation US including soprano Tereza Gevorgyan, mezzo-soprano Matilda Paulsson, tenor Roberto Gómez-Ortiz and baritone Ross Ramgobin will also perform operatic excerpts from Mozart’s “Don Giovanni” and Verdi’s “Rigoletto.” Cristian Macelaru, winner of the 2012 Sir Georg Solti Emerging Conductor Award, will also appear. Valery Gergiev will conduct and Lady Valerie Solti will act as host and there will also be video tributes from celebrated Solti collaborators and friends.

The concert is being relayed live by many radio stations around the world—hence the early 1:15pm afternoon starting time—and recorded for planned worldwide TV transmission and DVD release. The orchestra will be made up of the finest musicians selected from the world’s greatest orchestras, including past and present members of the CSO. As for all World Orchestra for Peace events, all performers are donating their services as international ambassadors of peace.

It seems a fitting way to honor the memory of an extraordinary man that had an incalculable impact on Chicago. Even though the Chicago Symphony had always been a world-class orchestra, particularly during the tenure of music director Fritz Reiner from 1953-1963, it took Solti to give the orchestra its long-overdue national and international recognition.

For the first time under Solti, the orchestra set up a regular series of spring concerts in New York’s Carnegie Hall, as well as tours of Europe, the Far East and Australia. The sold-out houses and sheer adulation of the thousands of music lovers Solti and the CSO routinely encountered on tour was unprecedented in the world of “serious” music, and often more closely resembled the frantic response of rock-concert crowds.

Other than touring, the major factor in establishing the Solti/Chicago mystique has been the many recordings the team has made together, recordings that run the gamut from early works such as Bach’s “St. Matthew Passion” and Handel’s “Messiah,” to complete symphonic cycles of Beethoven (two sets), Brahms, Bruckner and Mahler, large works of Tchaikovsky, Shostakovich, Verdi, Wagner, Richard Strauss, French music of Debussy and Ravel, and five operas: Wagner’s “The Flying Dutchman” and “Die Meistersinger von Nürnberg,” Beethoven’s “Fidelio,” Verdi’s “Otello,” and Schoenberg’s “Moses und Aron.” Solti recordings have had an enormous impact on the music-loving public, the recording industry and, particularly on young music makers and conductors throughout the world.

Fifteen years after his death, Solti also stands as having won the largest number of Grammy Awards ever, a whopping thirty-two. His complete recording of Wagner’s “Der Ring des Nibelungen,” made in Vienna between 1958 and 1965, has twice been voted the greatest recording ever made, in polls for Gramophone in 1999 and the BBC’s Music Magazine earlier this year, and has sold over two-million complete sets worldwide.

Decca Records, with which Solti made over 250 recordings over a fifty-year period from 1947 until his death in 1997, is also commemorating the Solti centennial with deluxe re-releases of his “Ring” cycle as well as five deluxe box sets devoted to Bartók, Mozart, Wagner, Richard Strauss and Verdi as well as an unreleased opera DVD (his 1991 Salzburg Festival performance of Mozart’s “The Magic Flute”) as well as a two-CD collection of live audio recordings, many unreleased, from every stage of his career called “Solti: The Legacy.”