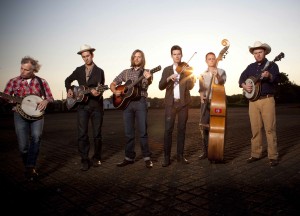 Whether Old Crow Medicine Show would be an engaging group of players without a blueprint laid out by the best country and string-band players isn’t an easy call. The ensemble has done everything it can to recreate the past, going so far as to pull in producer Don Was for collaboration. But issuing five discs’ worth of high-test tunes in just about a decade is no mean feat. 2008’s “Tennessee Pusher” even reads like an album’s worth of songs lazily telling a story about hawking drugs in the South, using I-65 as its main drag. What’s confounding about OCMS, and bands of its ilk, is that the group simultaneously holds up all that’s remarkable about American music but reminds listeners of its overwhelming shortcomings. “Bobcat Tracks” finds the aptly named singer, Critter Fuqua, conversing with an absent animal, wondering what the creature’s up to. It’s a quickly paced raver, with the violin almost forcing listeners to jive along to the rhythm. Lyrically bereft apart from a few choice lines, folks have to take in clunkers like: “Tell me Mr. Horse, what is your deal,” with the band echoing the second half of the phrase in harmony. Putting out “Carry Me Back” this year hasn’t revealed any revelations—there’re still a slew of songs about places in the South and bootlegging. At least the spate of songs is turned in swaddled with enough booze to have it remain engaging. While the ensemble approaches Holy Modal Rounders’ territory on occasion, it just seems like an accident. There’s not too much sense of purposeful humor. It’s there, but just below the surface and subservient to the belief that Nashville still cranks out heaps of worthwhile music. It’s slowed to a trickle, but thankfully, OCMS spilled out. (Dave Cantor)