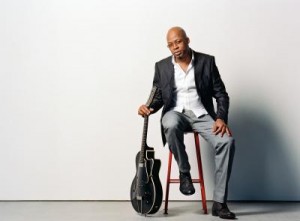 Benin-born guitarist Lionel Loueke has gone through an incredible journey since he first picked up a guitar when he was seventeen years old. The musical path he followed took him to Berklee College and later to an audition at the Thelonious Monk Institute in Los Angeles, where he played before a panel that included legendary jazz players Herbie Hancock, Terence Blanchard and Wayne Shorter, who were so impressed by his style and technique that  they all invited him to play on their bands.

He has since collaborated with the likes of Esperanza Spalding, legendary drummer Jack DeJohnette and vocalist Gretchen Parlato in addition to his own work as a bandleader. On his third solo album “Heritage” (Blue Note), Loueke teamed with pianist Robert Glasper (who also produced the sessions), bassist Derrick Hodge and drummer Mark Guiliana to create a unique blend of his native African sounds with American contemporary jazz. The result is quite impressive—for instance, “Hope” is a gentle ballad that features Glasper’s piano as a backdrop to Loueke’s vocals and guitar, while “Ifê” is pure West African music played from a jazzist’s point of view.

Listening to Loueke’s sound you realize that he is one of these musicians that appear once in a lifetime to illuminate the music scene in ways that have not been done before. (Ernest Barteldes)