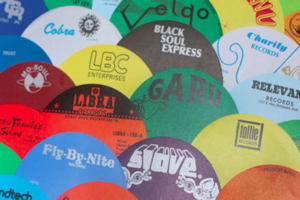 Some stories have to be discovered before they can be told. In most cases, when reaching back forty or fifty years in search of the right pieces that make a story whole, this means getting creative. For nearly ten years, the gents from the Chicago-based archival record label Numero Group  have found success tracking bountiful amounts of long-lost musical antiquity. We can all thank Tom Lunt, Rob Sevier and Ken Shipley (Numero Group founders) for a world with more soul, R&B and gospel that otherwise would’ve most likely remained overlooked. Their desire to find these hidden recordings and the stories that go along with them have led them to an assortment of towns and cities across the United States. In their business, travel tends to be the easy part. Most of us would deem searching for what is no longer there a near-impossible feat. Equipped with a sixth sense, luck and the pursuit of the truth, Numero
Group follows up with every lead, from the band members themselves and studio engineers to, in some cases, their next of kin. They seek out buildings long since demolished—places that had once housed the soundproof walls of small-time recording studios and in-home basement record labels. All for the sake of giving those who made the music a better experience within the industry and the rest of us the long-awaited chance to appreciate it.

Numero Group has had the most success with their sub-label, Eccentric Soul. In honor of its forty-fifth release, the “Eccentric Soul: Omnibus” release party is being held at the Hideout. DJs will preview tracks from the Omnibus collection as well as other rare soul, funk and R&B records. Eccentric Soul: Omnibus is a collection of forty-five 45s, all small soul and R&B labels from around the country. Each record features a very rare A and B side from the artist. One of the groups featured is South Side Chicago’s The Intentions, who made two singles in a Gold Coast recording studio in 1971. A disagreement between the young band members—which included future renowned flutist Derf Reklaw and Soul Messenger Thomas Whitfield—and their unofficial manager, Art Dubois, over wearing stage outfits at parties, prevented the band from ever moving past this one-time recording. Numero Group recounts this and many other anecdotes  in a 108-page clothbound hard-cover book of liner notes. Each platter is branded with a replica of the 45s original label sticker. The collection also includes a sturdy carrying case, available in various color combinations, and a downloadable version. (Jessica Burg)