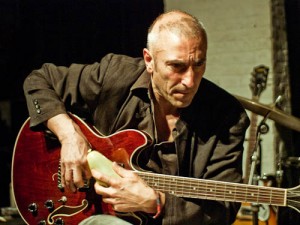 The biggest names in surf music are pretty much all sideshows at this late date. Reviving them isn’t even really a possibility. But their music still pervades our culture and continues to impact scores of performers as well as movie fans astute enough to hear echoes in Ennio Morricone’s work. Marco Cappelli, an Italian-born guitarist and composer who has worked in academia and alongside Han Bennink, Marc Ribot and other thoughtful performers, has taken an appreciation for New York’s downtown jazz, his cultural background and love of reasonably obscure horror flicks and blended them in his Italian Surf Academy project. The trio’s name doesn’t do it justice—and neither does the show’s early start time. Granted, some of the source material is milktoast at best, but Cappelli ably juts from traditional rock tropes to all-out skronk on “Tiffany Sequence.” Vocal cuts led by Gaia Mattiuzzi come off as something best suited to the screen instead of at-home listening. Of course, musically, the songs don’t rank as bummers—the focus is just pulled to the wrong place. After a verse of “Deep, Deep Down,” Mattiuzzi’s contributions subside, leaving Cappelli, bassist Luca Lo Bianco and drummer Francesco Cusa to push the song from Mario Bava’s 1968 “Danger Diabolik” beyond soundtrack territory. It’s only a momentary side-trip here, but a conceptual one that’s given proper time to develop on a subsequent song from the same film. “Driving Decoy” mines some vocal samples from Bava’s work, before Cappelli turns his guitar toward a menacing, descending line swamped by reverb. The pace picks up, hinting at the filmic work’s tension. Not being familiar with the movie or Bava—although “Black Sunday” (1960) and “Black Sabbath” (1964) are highly recommended—won’t be a problem. For some, accepting the recombinant nature of Cappelli’s project will be. (Dave Cantor)