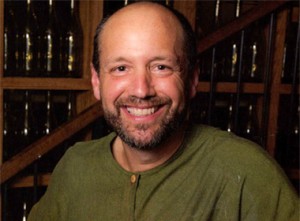 Chicago doesn’t love being called New York’s follow-up act. So Michael Dorf’s affectionate nickname for his Randolph Street City Winery location—City Winery 2.0—might not totally entertain. But listen to how Michael Dorf describes his 2.0, and you might change your mind.

“I just gave a tour to some very important finance people—I hope—for us in New York, and my entire tour of New York, which I used to be so proud of doing, I had to qualify everything, and say, ‘Oh, if you could only see Chicago, and if you could only see here what we did in Chicago.’” Dorf positively sparkles when he says this.

Dorf, forty-nine, is the founder of New York’s legendary Knitting Factory, the music venue that grew from a DIY space for avant-garde jazz and experimental punk and rock to a fixture on the New York music scene to a small chain of venues with locations on both coasts. The Knitting Factory’s history is a classic tale of heartwarming American entrepreneurialism: a couple of boys from Madison, Wisconsin, (Dorf and friend Bob Appel) move to New York City and start a club using a loan from grandparents, and somehow find themselves booking high-quality, underground avant-garde jazz acts; things snowball, and the Knitting Factory becomes a New York legend.

Over the years, Dorf has been involved in countless clubs, both running his own and consulting for others, as well as various other for-profit and nonprofit enterprises. In 2004, after he left the Knitting Factory, he initiated a series of tribute concerts at Carnegie Hall, with proceeds going to a handful of music-related non-profits. The concerts honored artists like Joni Mitchell, Bob Dylan, Bruce Springsteen, Elton John, REM, The Who, Neil Young and The Rolling Stones. Dorf seems to have a penchant for the tributes, almost to the level of kitschiness: the homepage of his website displays a variation on the blue-and-white, oval-shaped Ford logo with the word “Dorf” in place of “Ford,” and a photograph of Dorf himself with arms outstretched, the smiling presenter. One of Dorf’s many other ventures, an outdoor music festival celebrating Jewish artists, is called oy!hoo, a riff on Yahoo!

I met Dorf last month at his City Winery Chicago location, which had been open for about a month at the time. A tour of the 33,000-square-foot space, built into what used to be a refrigerated storage unit, displayed the charms of its comfortable, functional layout. The designers kept the original brick walls, but added arches, which frame the entryway from the foyer into the main dining room. Dorf commented on the arches, saying, “we put all that in, because that has a kind of Italian wine mentality, and I don’t know what it is about arches, but it kind of has this—maybe cellar, and cellars, whether it’s conscious or unconscious, make you think about wine.”

Walking into City Winery, you certainly do think about wine. Entering the foyer, where you can stop immediately at the merchandise desk to the right, you see a handful of small, high tables enclosed by a half-circle of cross-sectioned wine barrels, stained a rusty red inside from use. Above your head hang enormous decorative wine bottle replicas. Looking to the left, a wall of enormous, uninterrupted glass shows you the outside patio, where patrons can eat, shielded from the street by lattices. When I visited, City Winery had just obtained a license to serve food outside, and plans for brunch on the patio were underway. All of this—the spaciousness and flow of the space—is calculated to facilitate “the transparency and integration of the winery and wine-making with the facility: the restaurant, and food and beverage and the venue,” according to Dorf.

To the right, passing under those cellar-like arches, sits the dining room, an open space with a giant photograph of pouring wine that overhangs the full bar as its focal point. City Winery’s head chef is John Fuente, a trained musician and former instructor at the Chicago Le Cordon Bleu Institute, among other things. He presides over a menu whose courses are named after parts of a music show, like Sound Check, Opening Acts, Intermission and Main Acts—the Encore dessert menu is available upon request. Among the Main Acts are Cornish hen, veal schnitzel, steak frites and grilled yellowfin tuna; cheeses, we are informed by a sidebar on the menu, focus on Wisconsin, France and Spain.

Well-tuned menu aside, City Winery’s focus is, of course, wine. Further into the building, past the dining room, stand eight enormous fermenting tanks, two of which are kosher. Like the New York location, this City Winery is slated to become a fully functioning winery. The plan, once everything is fully operational, is to have every aspect of winemaking happen on the premises from the crush to the bottling (except the grape-growing, of course). The Winery gets grape shipments from all over the country, with red grapes shipped in clusters and white shipped as juice. Next year, says winemaker Rob Kowal, City Winery hopes to start getting local white grapes from Michigan. When I visited, the winery was still receiving shipments of wine made in the New York location, and awaiting its first shipment of grapes at the end of September. The Winery will offer winemaking classes; guests will be able to make their own wines and even bottle and label them. David Grisman and Lewis Black, friends of Dorf’s who have performed at the Chicago City Winery already, each have their own label.

And then, of course, there’s the music. Separate from the restaurant, the performance space is an 8,000-square-foot room that seats 300. Tables extend out radially from the stage at the front of the long room. City Winery opened with five nights of performances by the comedian Lewis Black; this fall’s lineup features artists like Mason Jennings, Shemekia Copeland, Kaki King, Rosanne Cash, Mavis Staples, the Blind Boys of Alabama, and Los Lobos. City Winery managed to snag talent booker Colleen Miller, who spent seventeen years at the Old Town School of Folk Music. Dorf calls her presence at the Winery “a wonderful gift from the programming gods,” and noted that she wanted to get on board: “when she started seeing what we were doing in New York, she fell in love with it.” But a lot of the exciting lineup is due to Dorf’s own connections after a couple decades in the business. He explains, “when I opened City Winery in New York, I was able to call in favors and friends and agents and managers and artists and, you know, we’ve got a pretty robust calendar, and we focus on music that’s going to really work in this environment.”

Environment is key. The goal, for Dorf, is really an integrated music, dining and wine-drinking experience, and he’s very attuned to the subtleties of the perfect combination: “That integration, or that setting of the right space is paramount to someone really enjoying the performance, enjoying the show. And it’s every little detail—it’s the air conditioning, it’s the lighting, it’s the seating, it’s the type of table and wood. And all of those elements affect the way the viewer of the show is going to have the experience, and then their experience changes the performance.”

For Dorf, making that experience happen means being involved in every excruciating detail. He confirms his extensive involvement, saying, “Yes, every detail, I mean I got very nerdy about it, but into it. I’m very into it.” Part of that integration is the complete winery on the premises; another part is the streamlined process that starts with buying the ticket and ends with enjoying dinner in the pillar-free concert hall. The music venue part of City Winery offers what they’re calling the VinoFile Program—members get to sit in a slightly raised part of the room toward the back, just in front of the aging and storage area, visible through giant glass panels. With the Chicago location, Dorf believes he’s closer than ever to that perfect integration—even despite a few rough early reviews. He says, “I think we built a better mousetrap.”

Having built that better mousetrap, the next step is to take it to find more mice. Dorf is clear about the plan to bring City Winery to other cities. He sees City Winery as a unique combination perfectly suited for a sophisticated audience, one that’s transferable: “I feel like it’s a model that actually can work in a whole bunch of cities; thus the name, City Winery.” There’s a real opportunity for expansion in this niche of the live show industry, Dorf explains: “Live Nation, because they’re a conglomerate, and so big, they buy House of Blues thinking that that’s gonna be their small-room outlet—they’re a major, major corporate entity, so they’re not going to have a high-end hospitality-focused concert space. This whole section is out of their mindset, it’s not on their radar.”

Dorf says he gets emails from people every day all over the country and beyond, even, asking for a City Winery in their town. For 3.0, Dorf has his eye on Boston.