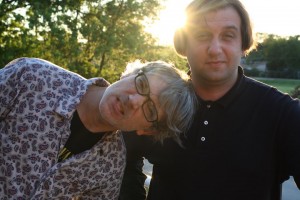 The English Softhearts have taken a ten-year hiatus, but they return gracing crowds with their unique brand of garage rock meets stand-up comedy. The Softhearts began in 1997 in the suburb of River Grove when the independent music scene looked a bit different than it does today. The core of the unit is the creative duo Marc “Bubblebath” Arcuri (drums, vocals) and Rich “Salamander” Szczepanski (guitar). Szczepanski oddly states the band’s name is “Echo & The Bunnymen described in laymen’s terms.”

They returned last spring to find the music scene a bit different then they left it. Back then they played the River Grove VFW Hall, Szczepanski’s attic, and the now-defunct Fireside Bowl, where Szczepanski worked under the production company MPShows. “The Fireside was the total culmination of everyone’s hopes and dreams for a better Chicago,” says Szczepanski. “We will always carry what Fireside Bowl meant to all of us. What a scene needs more than anything is a place to flourish, and it’s tough. My hope and dream for Chicago is to know it can still do it again.” With the Fireside gone, the band has endured, fitting in on bills at bars like the Burlington and Cole’s.The Softhearts have also updated their approach to releasing albums. Their past discography includes five albums and an EP, notably the full-length “Blue Oyster Quilt.” Before their first reunion show, at an anti-Pitchfork showcase, Szczepanski made their albums available for download via the band’s website.

What remains unchanged is the band’s infectious chemistry. At a typical show Arcuri, when not blasting random drum fills, banters with the crowd about nineties alt-rock music videos on YouTube or some deep cut he heard earlier on the Drive. Szczepanski surveys the crowd, thanking anyone and everyone in attendance (which he similarly does in his role as long-time co-host of the Well Slept Film Fest). Half the time, when Arcuri’s drumsticks count off a song, a befuddled Szczepanski is recovering from jumping off stage and lying on the ground amongst the crowd. It’s clear they haven’t lost their showmanship. But they have changed their outlook on being a band. “This time Marc and I know what to do,” says Szczepanski, “take advantage of our second act.”

And their “second act” is well underway. Last winter the two collaborated on “End It,” their first album in ten years. Their return has also put them back in contact with old friends, as evidenced by their upcoming show with Joan of Arc. “Tim Kinsella was the main reason Marc and I got back together,” says Szczepanski. “He may not want that credit, but after Marc and I met up at the JOA show, we knew that if Tim could muscle his way through the muck without taking a ten-year break like we did, we just didn’t have an excuse.” (John Wawrzaszek)