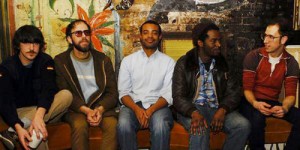 What ties this bill together isn’t necessarily going to be audible to casual listeners. Detroit’s spazzy Tyvek, krauty CAVE and the hard-to-palate Running sound remarkably different, while each act attempts to assimilate music from the seventies and early eighties into some sort of contemporary context. Tyvek and Running deal in more punky strains, the latter pulling on hardcore’s yolk more than the other two groups performing. Tyvek turns over the corpse of early Rough Trade acts, adding in a downer Midwest vibe that dour Brits wouldn’t be able to conjure even if it were their goal. With a headful of their hometown’s history, the ever-shifting Tyvek lineup has been able to dash its jangly paranoia with a garage intent, resulting in weirdly satisfying simplicity. “Frustration Rock,” which the band’s recorded several times over the last five years with varying success, is an affected screed on disappointment in as many facets of life as can fit into two minutes. “Air Conditioner” isn’t a dramatically different song lyrically or musically, but in it, they discuss one’s inability to sleep during the summer without a bit of cool air. More broadly, though, Tyvek’s just dissatisfied with stuff. And they talk about it in language some might find best suited to a shopping list. Vastly more complicated, and purposefully obtuse, Chicago’s CAVE turn in extended takes on funky compositions. They use reapto-German rock stuff as a base, but toss in enough low-brow references to hash and getting wasted that it’s a uniquely American take. Proggy moments surface on “Encino Man(g),” but are splayed out over such a robust rhythm section that it all just sounds like future funk, raved up by some dudes in a dingy Chicago basement. For maximum music edification, arrive early and stay late. (Dave Cantor)