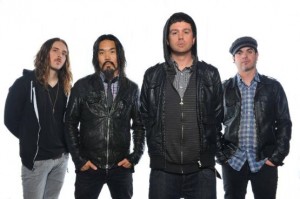 You’re not likely going to walk into a grocery store and hear Unwritten Law playing over the loudspeakers. While Green Day and similarly minded pop-cum-punk groups turned a corner, producing widely palatable works, this SoCal troupe kept to a more hard-rock territory, subverting some of its punkier inclinations over time. Hearing Unwritten Law’s first two discs—the 1994 “Blue Room” and its 1996 follow-up “Oz Factor”—it’s difficult to hear what made the band attractive enough to garner major label attention. Differentiating between a track like “Suzanne” with its plainly sung vocals, hints of harmony and rudimentary pop construction, and then-contemporary groups on Fat Wreck Chords or Epitaph is virtually impossible. But keeping songs to topics that could be easily assimilated in to MTV’s rotation—just not into market aisles or homecoming dances—was an accidental boon to the group, even if writing half-a-dozen albums about girls must have been pure drudgery. Landing a few hits on the radio didn’t make efforts like the 2002 “Elva” easy to understand. A terse bit about maturity can’t explain all the over-produced schlock included on the album. Of course, the slight development enabling Unwritten Law to work up hits like “Seein’ Red” comes at a cost to the collective’s punk cred. But since credibility never paid a bill, it’s hard to blame musicians for making a few dollars. Embracing the band’s first pair of discs with a teenaged enthusiasm should make all the driving simplicity behind Scott Russo’s crooning a pleasant time warp, allowing for reminiscing and perhaps providing the impetus to fuck shit up. And really, since most songs in the history of music seem to be about girls, having a sugary punk music backing the trite sentiments is a good way to relate a haggard message. MXPX headlines. (Dave Cantor)