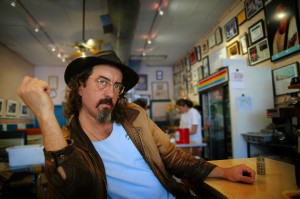 Listening to “We Can’t Make It Here” from the 2005 album “Childish Things” immediately makes you respect James McMurtry: his lyrics are a direct indictment of the hypocrisies of the right and also of big-box discount stores like Walmart who encourage companies to ship jobs overseas in order to reduce costs to their customers.

The son of novelist and screenwriter Larry McMurtry, McMurtry has been part of the folk-rock scene since John Mellencamp produced his debut “Too Long in the Wasteland” back in 1989. He has since collaborated with the likes of John Prine and Dwight Yoakam (in the “supergroup” Buzzin’ Cousins) and has regularly recorded and toured with his backing band, the Heartless Bastards—though the band is no longer billed in that manner because of confusion with the Ohio-based band of the same name.

His style is very personal—a mix of urban and country folk—“Just Us Kids” has a touch of Lou Reed thanks to its cadence and delivery, but McMurtry definitely has a voice of his own thanks to his honest lyricism and  unique guitar fingerpicking style. (Ernest Barteldes)