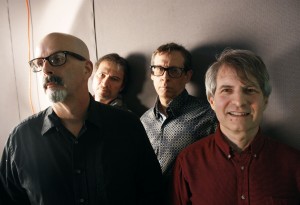 The history of the dBs sounds almost like a rock ‘n’ roll movie: the band forms in the late seventies, makes some great recordings that are well received by critics but that fail to reach a larger audience. They put out a few more albums with some lineup changes and then ultimately break up after a few years, and the former members move on to make music on their own.

That could have been the end of that story (with a “where are they now” bit during the end credits), but sometimes life takes a detour and you find yourself back to where you were. That is the case of The dBs, whose original lineup of Peter Holsapple (guitar, vocals), Chris Stamey (guitar/vocals), Gene Holder (bass) and Will Rigby (drums) decided to not only come back together but also make new music—which doesn’t sound like a lame comeback album.

Actually, their new album “Falling Off the Sky” has a few retro moments like “Write Back” (which is reminiscent of early R.E.M.) and “Far Away and Long Ago” (think mid-seventies Wings), but the band’s music otherwise feels quite current, even if many of the lyrics look back at days gone by. (Ernest Barteldes)