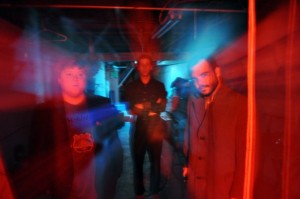 With their flimsy drum machine loops, strumming guitar chords and ambient keyboard melodies reminiscent of New Order, Future Islands is the perfect music to play while crying your eyes out and knocking shit over in your apartment. Their music is pro-human; confessional songs that detail breakups and loss with an organic-sounding composition, which somehow makes it all better. And it seems to be working for them. Their last album, “On the Water” (2011) earned Future Islands word-of-mouth notoriety and recognition on Billboard’s Heatseekers chart.

What makes Future Islands stand out from every other current synth and sequencer indie rock collective is the dramatic weight front man Samuel T. Herring thrusts into his vocals. His lyrics tend to hold you captive inside the private thoughts of a broken man, sung in a voice with a strange and unique sound. Herring’s effusive range sometimes erupts into a high-pitched, cowboyish yip or a rough, confusing grumble. On stage, he plays up the role with eccentric gestures, bordering performance art.

Now residing in Baltimore, the trio has been playing music together since their days at East Carolina University some six years ago. Since relocating, they’ve had the fortune of working with producer Chester Endersby Gwazda (who also worked with Dan Deacon) on their last two albums, “In Evening Air” (2010) and “On the Water.” (Jessica Burg)