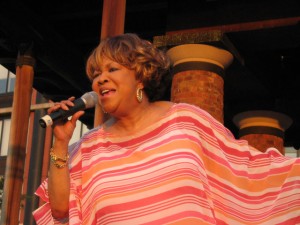 Performers have forgotten over the last few decades how useful it is to have a point to your music. Innocuous tunes about booze and boning are always going to have traction, but recordings from the Staple Singers remain an unmatched body of work that touts determination and tenacity. Mavis, her father Pops and a cadre of sisters performed from the 1950s through the eighties. They used music to connect their own community and worked to unite every thoughtful person in the country. Along the way, Mavis worked with everyone from Bob Dylan to the Stax house band alongside her family and during solo endeavors. It took her about sixty years to be awarded a Grammy—she may deserve a few more—but it was a hard-earned piece of recognition. With that accolade behind her, as well as several honorary doctorates, one of Chicago’s true treasures has gigged around the city sporadically over the past few years, hitting up the blues festival last summer. The anointing of the new City Winery with tunes from the last decade will be a surprising collision of the secular and religious. Staples’ latest album, “You Are Not Alone,” helmed by Wilco frontman Jeff Tweedy, counts numbers about Moses persisting through that pesky sea and a handful of other well-known religious numbers, “In Christ There Is No East or West” perhaps being the most widely known. But the inclusion of Rev. Gary Davis’ “I Belong to the Band” marks a perfect synthesis of Staples’ interest in blues, R&B and gospel. The good reverend, a finger-picking guitarist with few peers, couldn’t have intended his tune to be rendered in groovy Sunday glory as it’s related on Staples’ 2011 disc. Her rendition isn’t as sparse as it would have been if Pops arranged the whole thing, but the added funk works to good effect. Kelly Hogan opens. (Dave Cantor)