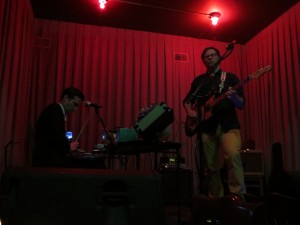 As the old saying goes, imitation is the sincerest form of flattery. At the end of October, Matt Clark and Jeremy Lemos of the unconventional sound-based band White/Light performed a live re-creation of Funkadelic’s immortal rock/psych/funk album, “Maggot Brain.” Their set was part of Playing Favorites, a musical series occurring the last Sunday and/or Monday of every month at the Whistler in Logan Square.

This White/Light show went far beyond a forced attempt at covering assorted P-Funk hits. Clark and Lemos revealed a candid sense of Maggot Brain’s true influence by interpreting the album in their own musical style—which is often described as experimental drone-guitar. Lyricless, it sounds like the music that might exist if the fate of the human race fell subject to computer domination, like in “The Matrix:” hypnotic mainframe pulsations layered with screaming drills evocative of dental machinery. An unlikely comparison for innovators of the funk music sound.

As Lemos took his seat at the synthesizer keyboard and Clark strapped up to the electric guitar you couldn’t help but wonder what to expect. Maggot Brain’s eponymous opening song starts with George Clinton talking in a god-like distorted voice, then tiptoes into a sensuous ten-minute guitar solo by Eddie Hazel. The first chord Hazel plays is unmistakable. White/Light followed Clinton and Hazel’s lead convincingly and in a way that reminded you that, like them, Funkadelic was not afraid to experiment with their instruments. Throughout the album, different techniques were implemented to harness the power of P-Funk’s twelve person ensemble. Sometimes Clark became particularly busy on the whammy-bar, or Lemos played an electric guitar in his lap with a bow. Even the bartender’s martini shaker complemented the disjointed sounds, and the dim lighting and close quarters of the Whistler made an ideal setting for such a personal performance. (Jessica Burg)