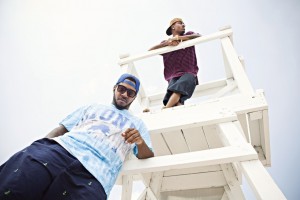 As a duo, the Cool Kids have issued some work that effortlessly merges old-school tendencies with new adventures in modern production styles. Releasing that handful of mixes and some absurdly titled albums about fish and bicycles allowed Chuck Inglish and Mikey Rocks the gravitas to take a bit of time for solo endeavors. And a  youthful uncaring continues to unfold on Inglish’s “WRKOUT” and Rocks’ “Lap of Lux.” Sonically, both albums move away from proper Cool Kids’ production, embracing more of an analog vibe. Ostensibly, “WRKOUT” is professional sounding beat-tape with Inglish taking twenty-eight minutes to explore music that might not have been a good match for an MC—and almost certainly not a perfect match for the Cool Kids. Displaying an array of approaches to his work behind the boards has granted Inglish entry to the world of performers like Rick Ross, Travis Barker and Dom Kennedy. And while the performer has seemingly grown over the few discs he’s worked on since the Cool Kids’ last release, it sounds as if on “Lux” Mikey Rocks has regressed to a certain extent. “Good Sushi,” with its odd vocal intonation and grim lyrical outlook, isn’t gonna garner new listeners, even if the MC is clearly suited to rapping over just about any beat available. Pulling in left-field guests like Casey Veggies and pairing him with Mac Miller is a good idea but reeks of opportunism and half-baked conceptualization. Even the lowest-brow efforts from “When Fish Ride Bicycles”—like “Penny Hardaway,” which features the Wu’s Ghostface Killah—had enough weird flare to arrive as something reasonably original. Even if it weren’t, hearing the duo’s take on heading up to the corner gas station warrants a few repeat listens and makes their appearance at MiMOSA’s Future Trill Tour more enticing than it would be otherwise. (Dave Cantor)