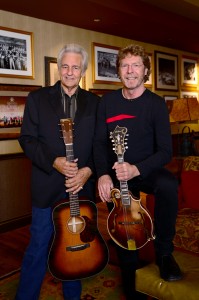 Pairing Del McCoury and Sam Bush is at once a perfect match and somewhat antithetical. The older guitarist who made a name for himself in bluegrass before Bush had even touched an instrument is completely rooted in the music’s historical resonance—Americans struggling through the depression and then working through the building of this country’s middle class. Bush, on the other hand, is included in the crop of players influenced by that early wave of performers but also sixties counterculture. Musically, the duo share an affinity for the traditional, although Bush and his mandolin have been seen cutting up stages posed as a rock star. McCoury, a guy who’s been around long enough to tour and record with a band comprised of his children, still hedges toward traditional lyrical topics, issuing a 2006 album made up of devotional tunes. “The Promised Land” could easily be set alongside any Louvin Brothers’ disc and includes a clutch of songs detailing bible toting and any number of songs about wearing a crown and strutting around. The religious aspect of bluegrass isn’t ever going to subside, but Bush and his cohort who played in the New Grass Revival mixed in enough pervy Chuck Berry to push back at an entire era of bluegrass. Granted, the all-acoustic nature of those recordings was able to connect new and old America. A bit of leftover tension must remain between the now-sixty-year-old upstart and surviving first-wave players. Curly Seckler’s still playing county fairs in Tennessee and Bush now constitutes an institutional figure who even northern secularists favor. With age, though, comes wisdom. And when McCoury reworked “Sit Down with Jesus” for that 2006 recording, he had it figured out. “Break bread and share good conversation/He made no distinction of status or of station/Just extended an open invitation.” (Dave Cantor)