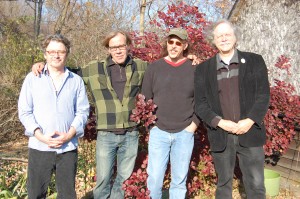 Shorn of all the art-world hyperbole the Velvet Underground trucked in, the Fugs, another New York City rock band formed during the mid-sixties, were able to say and explore similar ideas in its music. There weren’t as many references to smack, but using Charles Olson as a literary hero in lieu of Delmore Schwartz seems like trading up. Founded by poets Ed Sanders and Tuli Kupferberg, the band took archaic American music, merging it with a willfully lowbrow take on then-modern rock tropes and forged a relationship with Harry Smith, enabling the group to begin recording before the Beatles were able to get too far beyond its hand-holding stage. Instead of the prevailing pop-culture references, the Fugs chose to turn toward a nihilism, channeled through Eastern thought and general beat philosophies. “Nothing,” a track from the group’s 1965 “The Fugs’ First Album,” lists everything from fucking to Ginsberg and Stalin, saying they’re all a buncha nothing. Its droning vocals being backed by hand drums and harmonica only makes the offering more difficult to take even forty-plus years after it was conceived. That was the point, though. Advancing musically, “The Fugs Second Album” continued making outlandish statements but made the whole venture slightly more palatable for a slightly less radical audience. “Frenzy” sounds prepped for the Cramps to cover , although “Group Grope” and “Dirty Old Man” remain significantly more offensive. Even amid free-love vignettes, the Fugs talked up communal living, referencing growing asparagus and eventually spinning off the Holy Modal Rounders, a twisted string band dedicated to reviving lost folk tunes. Even with Kupferberg’s passing in 2010, the vital lunacy the Fugs continue to truck in is more than enough to fill any stage in 2012. (Dave Cantor)