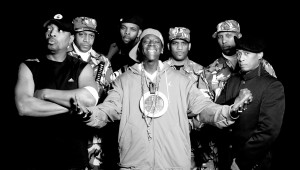 Two and a half decades after “Yo! Bum Rush the Show,” Chuck D. and Public Enemy retain the righteousness and displeasure with broad American culture that made its earliest efforts landmarks in hip-hop. “The Evil Empire of Everything” counts as PE’s second disc of the year, but this newest album centers around the Trayvon Martin shooting that occurred earlier in 2012. While it’s unsurprising that Chuck D. has a point of view on those occurrences, it is stunning that the album centers on the incident, opening with 911 calls revealing a still-vibrant American paranoia surrounding black kids in hoodies. The theme’s strung throughout the disc, making “Evil Empire” a concept album, pulling its narrative from journalism’s headlines. Continuing to dissect the news and revealing a point of view sometimes marginalized by media outlets furthers the group’s overtly political career while reminding listeners to “consume the gift of boom” on “1 (Peace).” Most explicit in its description of the Martin case is the album’s “Beyond Trayvon” on which no less than three MCs lend perspectives on the killing. What’s remarkable about the track and Chuck D.’s decision to concentrate on the case is that it’d be difficult to recall the last time Martin’s name appeared on front pages. On the following cut, “Everything,” Chuck D. goes in on a sixties soul track, coming off like a bassy, displeased Otis Redding, taking on contemporary culture, Twitter, record companies and explaining the importance of discussing reality with family. The sax solo midway through the song lends the entire affair a softer contemplative tone than PE’s accustomed to. “Evil Empire”—which sensibly includes Rage Against the Machine’s Tom Morello alongside Henry Rollins—doesn’t displace anything within PE’s towering back-catalog, but empowers Chuck D. to again tour the world, calling bullshit on anyone he sees as a transgressor. But it all goes back to “Welcome to the Terrordome”: “Let the good get even.” (Dave Cantor)