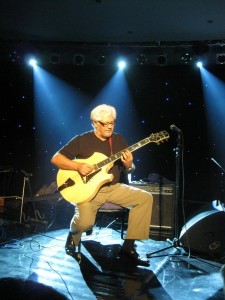 Some players willfully flout convention, bounding from one genre to the next. Guitarist Larry Coryell didn’t set out to play garage, psych, jazz and fusion. He’s just kept good company over almost fifty years in music.

“Rich Dangel and I shared a houseboat on Lake Union—the guitar player from the Wailers,” Coryell says. “I knew the Frantics… I was in a group called the Dynamics. We had the number-one song in Seattle.”

“JAJ” or “Jive Ass Jerry” is a sturdy instrumental in a Northwest frat style without too many flourishes separating it from then-current chart toppers. Granted, differentiating all those garage bands is difficult, but that lack of individuality may have contributed to Coryell splitting Seattle and heading for New York in 1965, just in time for what he gleefully refers to as the psychedelic revolution. After hitting the East Coast and founding the Free Spirits, Coryell began exploring a mix of popular music, jazz and Eastern sounds—the group’s “Early Mornin’ Fear” featuring some guttural sax skronk.

The band issued an album in 1967, which was re-released a few years back. But Coryell was fairly certain the Spirits weren’t headed anywhere. “Well, I took whatever work I could,” the guitarist says, “because I was totally poor. I worked when I could—I would do anything, play any kind of music just to make a few shekels.”

Coryell wasn’t completely confident in his skills at twenty-three, so he refrained from seeking entrée to New York’s jazz establishment. Instead of searching out those opportunities, one just came to him.

“[Vibraphonist Gary Burton] came down to a funky basement club to hear the Free Spirits. He was looking for a guitar player, planning to start a quartet of his own after leaving Stan Getz,” Coryell remembers of his offer to join a burgeoning group.

Burton led several ensembles through radically experimental recordings, pulling from a rock aesthetic more than any other jazz player between 1967 and 1969. There wasn’t a descriptor like fusion to be applied to these dates, but “Duster” and its follow-up “Lofty Fake Anagram” rate highly among the period’s forgotten classics.

“Well, if I heard ‘Duster’ and it wasn’t me, I’d say that record was a masterpiece,” Coryell says, void of sarcasm or deference to other performers on the recording.

Of course, when an album like “Duster” gets released, preceding a sizable shift in the genre, and goes on to become something only addicts crave, a bit of crass aggrandizement is understandable. But Coryell’s time with Burton soon gave way to other pursuits.

“Burton was very controlling. …it worked up until the point when I wanted to bring more of a rock ‘n’ roll mentality—not so much with the music, per se, but the attitude,” Coryell says. “I didn’t want to have too much of the old-fashioned jazz image.”

Subsequent to stretching out with both Burton and Herbie Mann, Coryell embarked on several albums under his own name, shedding the jazzier scaffolding of his past and exploring more aggressive arrangements, centered on his improvisations.

It’s on the stripped-down 1970 “Spaces,” an outing Coryell demurely refers to as “a very innovative record,” when Coryell fully realizes the approach to music he’d ride for the next decade. Despite the seventy-year-old guitarist’s inability to now objectively assess his own work, at one point even saying Miles Davis should have sought his advice before delving into fusion, “Spaces” roils in such a variegated approach to the genre that some of Coryell’s self-congratulation is warranted.

Released the same year as Davis’ “Bitches Brew,” “Spaces” takes a less-frantic approach to merging popular music and jazz. The disc’s first track, “Spaces (Infinite),” offers lighter moments to contrast with some of Coryell’s careening solos. His band, which includes guitarist John McLaughlin, who also appeared on “Bitches,” gets as blustery as any other band pushing at jazz’s limits. Hearing Coryell race against a funky R&B backing contributed by Billy Cobham doesn’t distance the album from Davis’ recording but provides evidence that there was more than one player who arrived at the same musical conclusion—and at about the same time, if not earlier.

With his artistic climax issued under his own name, it’s curious that Coryell founded and led the Eleventh House, a band in the same mold as the guitarist’s other jazz-rock troupes.

“That’s what everyone was doing at the time; Herbie [Hancock] got the Headhunters, Joe Zawinul had Weather Report. It was the era of ‘good feelings’ in the sixties. Everyone wanted to be more generous with each other instead of being outstanding individuals,” he says.

Moving from frat bands to psych and jazz then fusion doesn’t point toward a performer who possesses a ridiculously hearty attention span. So, in the decades following fusion’s decline, fans wouldn’t have expected Coryell to maintain a rather steady and reasonably traditional career, touching on standards as much as his own compositions during live performances. But the guitarist said what he learned from Davis, who produced a languishing set of Coryell’s tunes he doesn’t believe will ever be released, is that relentlessly searching for and exploring new interests is what keeps a performer vital—and accounts for his plans to stage an opera in Sarejvo based on “War and Peace” to commemorate World War I’s centennial.

The work, Coryell said, is unrelentingly antiwar, looping back around to his days in the sixties down in those psych dungeons. Musically, it’d be surprising if the results are as aurally expansive as anything from “Spaces,” but at least it’s clear Coryell won’t stop chasing the notions bustling ’round his silver-topped head.