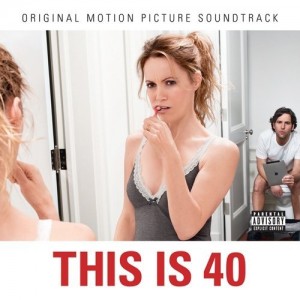 “This Is 40,” Judd Apatow’s upcoming sequel to 2007’s “Knocked Up,” deals with the lives of Pete (Paul Rudd) and Debbie (Leslie Mann) as they deal with reaching the landmark age of forty. The accompanying soundtrack, interestingly, has songs that deal with issues like love affairs that have reached their expiration dates, exasperation and just being happy to be alive.

The disc opens with Yoko Ono’s “Yes, I’m Your Angel,” a track from 1980’s “Double Fantasy” that was reportedly written to celebrate John Lennon’s fortieth, which sadly turned out to be his last. Three new songs from Fleetwood Mac’s Lindsey Buckingham follow—most notably “Sick of You,” a mandolin-based tune that blatantly points out why the relationship has gone sour.

Fiona Apple contributes “Dull Tool,” an inventive folksy song that might not get much radio airplay thanks to its liberal use of “fuck” during the chorus. Another great moment is “Lunch Box/Odd Sox,” an obscure Paul McCartney instrumental that deserved a second chance (it was the B-side of the 1980 single “Coming Up” and later appeared as a bonus track) because it is the former Beatle tackling something that he rarely does.  (Ernest Barteldes)