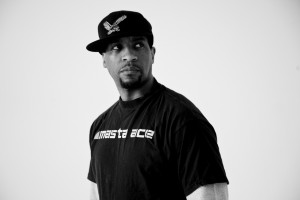 Masta Ace never went away, he just needs a comeback. And issuing “MA DOOM: Son of Yvonne” could have worked toward providing that. Only problem with collaborating with DOOM is that an MC may wind up rapping over a bevy of top-tier recycled beats. Either way, Ace issued a trio of well-received full-lengths during the early nineties, though none reached the charts’ upper echelon. While a few tracks connected with listeners—especially Ace’s misleading collaboration with Biz Markie—the rapper’s perspective heralded a critical age in the genre, but also guaranteed a disconnect with his potential fan base. Lounging on the cover of his 1990 “Take a Look Around,” Ace appears to be an assured performer. By this point in his career, he’d already appeared on The Juice Crew’s “The Symphony,” so the posture makes sense. Aping a then-contemporary vibe, the MC goes in on smooth piano loops and sax solos atop traditional beats. A song, “As I Reminisce,” could well be a “T.R.O.Y.” prototype. Three years later, “SlaughtaHouse” saw release and included a more modern production style. “Late Model Sedan” still smacks of the early nineties and echoes West Coast concerns. But it’s the confluence of coastal approaches that makes Ace’s second disc a discerning classic—and a contemplative success. Any mention of cars is soon followed by incisive comments regarding drive-bys and a lost sense of community. Of course, Ace and his compatriots are able to do all of this over a funky smattering of classic funk and jazz. The production only makes hearing Ace’s perspective more engaging, just not necessarily hugely commercial. Pharoahe Monch, 9th Wonder, Jean Grae and Mr. Len are also slated to perform. (Dave Cantor)