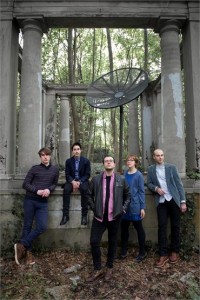 Who says busking on the New York City subway (or any mass transit platform where you can be heard) has no future? It was there that Queens-based Freelance Whales honed their skills playing folksy electronic music with unusual instruments (glockenspiel, banjos, xylophone) until they became indie-music darlings after the release of their debut “Weathervanes” back in 2009.

The band’s name comes from the band members’ perception that everyone in New York is a freelancer in one way or another (not sure if the folks down on Wall Street would agree with that). Their releases have been well received both by critics and fans, and some of their tunes have appeared in TV shows like “Grey’s Anatomy,” “Chuck” and “Skins.” Their music seems a bit minimalist—drums are played with brushes, and their arrangements are both creative and subtle, which allows vocalist (and main songwriter) Judah Dadone to comfortably convey his message without having to scream over the sound.

The band (which is rounded out by Doris Cellar, Chuck Criss, Jacob Hyman and Kevin Read) is now touring in support of their sophomore album “Diluvia,” which takes the group into a more electro-pop direction without losing touch with their more acoustic roots. (Ernest Barteldes)