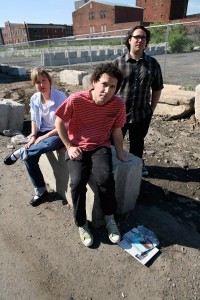 “Fade” starts with a credo of itself, and of Yo La Tengo’s relentless career, when Ira Kaplan and Georgia Hubley—married since before they started this thing, twenty-nine years ago—lament together: “Sometimes the bad guys go right on top/Sometimes the good guys lose/We try not to lose our hearts, not to lose our minds,” and go on to pile up the declarations of life’s difficult, routine truths (“the rain today hurts the drink to drink”), questioning why they keep moving forth (“this isn’t the road we know”), and ultimately bringing us to the resolution which the exceedingly pleasant, jangly chug of the music had promised all along, when they answer with “because it’s been fun,” and Kaplan provides the exclamation point (which, in this band’s enormous annals, is often much more of a semi-colon) in the form of yet another inimitable streak of guitar burn.

It’s about the only poetics that can explain such a band. Creators of fourteen EPs and singles, ninety-eight recorded cover songs (many of which can be heard on the recording “Yo La Tengo Is Murdering The Classics,” a fundraising effort for New Jersey radio station WFMU in which the band composed and played thirty-eight covers on the spot, requested by callers-in), a film score, two-hundred-sixteen original tracks, and thirteen studio albums (including this one), Yo La Tengo has inhabited a space somewhere between struggling independents and commercial success for much, much longer than seemingly any other group could endure. Just ask the indefinitely shelved Sonic Youth, who finally reached a halt in 2011 when it announced that its central, also-married partners Kim Gordon and Thurston Moore had separated after nearly thirty years.

But unlike that band, this one never really flirted with the mainstream, finding their real artistic stride when they solidified as the trio of Kaplan, Hubley and consummate third-wheel James McNew in the mid-1990s, just missing the now-unfathomable window that the radio industry left open between self-made rock ‘n’ roll auteurs and millionaire celebrity—one which Nirvana pretty much filled, all on its own, anyway.

And Yo La Tengo was never made for such feats, either. “Because it’s been fun” becomes the repeated lyric to fade out the barn-burning opener (“Ohm”) of their latest release, their thirteenth LP in a career spent writing love letters of songs between the library-shelves of indie rock; a career spent, it seems, not toward any form of brand growth, but in the nobler spirit of trying every style they can, and pulling off each of them, at one point or another, with genuine affection, and a subtlety that makes even the most screeching of Kaplan’s occasional guitar showcases seem somewhat quiet, and lonely. 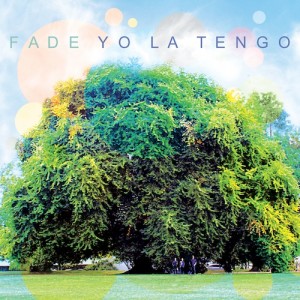 “Fade”—a ten-track, forty-six-minute album made more in the cohesive vein of 1993 and 1995 releases “Painful” and “Electr-O-Pura” than in the sprawling, mix-tape-resembling efforts that had been occupying them since 1997’s “I Can Hear The Heart Beating As One”—bespeaks the modesty and nuance of their oeuvre as much as anything they’ve done.
The record synthesizes the Motown and lounge-music leanings from moments of 2009’s “Popular Songs” and 2006’s “I Am Not Afraid of You and I Will Beat Your Ass” (a title which, in its evocations of rock ‘n’ roll’s unique gifts of agency, surely brings smiles to the bespectacled fans imagined in this article) with the sounds of their feedback-and-reverb loner soundtracks of the nineties to bring something new and singular into their discography. Holding this unexpected amalgam together are Kaplan’s guitar (subdued and elegiac, less pyrotechnic than ever) and an overall sincerity that shucks any of the band’s tendencies toward pastiche—which ran (perhaps too) prevalent on their last two albums. Here, instead, they’re pulling their bibliographical range through popular music into their most intimate album in over a decade. The bedroom arguments of “Stupid Things” and “The Point Of It” and the feeling of a partner’s warm hand while commuting in the gorgeous harmonies of “Two Trains” give way to the celebratory baroque horn bombast on closer “Before We Run,” which brings a final calm to this most assured of albums about love.

In a time when bands are less and less encouraged by their markets to make LPs in the most traditional, gestalt meaning of the concept, “Fade” is the kind of gift that makes January bearable for fans of such things; it’s a new prize from a group that’s been making them for as long as I’ve been alive. And until their productivity ceases, and I’m forced to re-imagine the gravity of independently made music, I’m at a loss in naming a more dependable source of headphone solace.