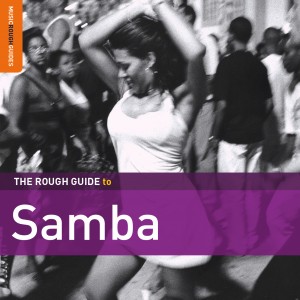 Though many new Brazilian artists have recently had a lot of attention in the international market, few actually represent samba, the country’s best-known musical genre. On this compilation from Rough Guides, we have a comprehensive sample of contemporary singers and songwriters alongside legends like Alcione and Martinho da Vila, who open the disc with a live take on “Duas Faces,” a classic song from Rio de Janeiro.

Da Vila’s daughter Mart’nalia (who has toured the US in recent years) appears on her hit “Cabide,” an uptempo tune that has a classic feel thanks to its simple organic approach. Pop singer Marisa Monte leads the “old guard” of Rio’s Portela Samba School on “Volta Meu Amor,” a heartfelt chorinho whose lyrics talk about the end of a love affair. Modern samba is represented by Luisa Maita, who appears with her 2010 hit “Lero-Lero.” There are a few novelties, like Loop B’s “Drill Samba,” which is actually played with an assortment of electric drills, and Mane Sagaz’s “Um Samba Que Não Sai,” which features distorted rock guitars.

The collection also includes a bonus CD with original music by Ruivão, a downtown Rio singer-songwriter who has brought samba back to its roots—he doesn’t use any synthesizers or any other gimmicks. Instead, he uses acoustic instruments that can be heard in any “roda de samba” in Lapa, Rio’s cradle of Samba. (Ernest Barteldes)