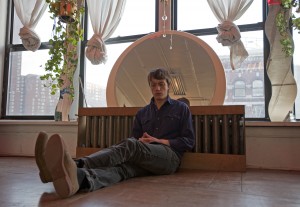 “My first solo guitar performance was in my backyard when I lived in Philadelphia,” Steve Gunn says over the phone from his Brooklyn residence.

The journey from performing in a band to amassing enough confidence to get out in front of a crowd and express musical ideas can be an excruciatingly difficult maneuver. Inspiration helps, and for Gunn, it showed up in the form of departed guitarist Jack Rose.

“I only played a very short set,” Gunn says of that backyard gathering. “Jack played and a few other friends. That was my first attempt at doing it. Then I didn’t do it for years after that.”

A revival of interest in players like Leo Kottke and John Fahey bloomed during the middling-aughts, while Rose’s renown grew beyond Pelt, the band he’d founded while still in Philly.

The majesty of a single dude seated on stage, flashing fingers up and down a fret board still doesn’t have broad commercial applications, but working for the last seven years to interpret and redefine his influences has brought Gunn to a new venue for collaboration. Taking everything from American Primitive guitar to Indian classical music, Gunn’s worked through droning improvisation on his own, but found a way to affect his palette by gigging in the Sandy Bull-styled Gunn-Truscinski Duo.

“Certainly, there was a level of frustration with bands and trying to get that stuff to work, everyone having different perspectives on what they wanted with music,” he says of earlier group efforts.

Issuing two full-lengths in as many years, the duo assimilates Gunn’s guitar inclinations into a more rockin’ context, making use of repetition as much as subtle jazz shadings. It’s another “East Meets West” endeavor, drawing equally from the Butterfield Blues Band jam and Ahmed Abdul-Malik. Even with such overwhelmingly different contexts as free jazzin’ collaborative works and bluesy folk ragas, it remains difficult for the guitarist to differentiate between efforts.

“I’ve been trying to keep it separate,” Gunn says of his projects, despite a melody from “Taksim II,” a track off the pair’s 2010 album, coming to bear on solo outings. “The material John [Truscinski] and I come up with, we come up with together. That stems from us going to the rehearsal space and coming up with different themes and melodies. We tape a lot of stuff and try to expand these little ideas. …But it gets complicated, because I’ve been playing some of that material in a trio. …It bleeds into one another… sometimes unconsciously.”

What Gunn does adeptly in any setting is work up a single musical concept and decimate it. His compositions frequently hit the ten-minute mark, exploring ceaseless caveats of any slight melody. A haunting minimalism waves through the two versions of “No Atlas”–one on the 2008 “Sundowner” and another, though more quickly paced, on 2009’s “Too Early for the Hammer.” It’s a deliberate tune, hued by cultures other than Gunn’s, melancholy but not unsatisfied. Humming the thing is impossible, although the evocative nature of his work allows listeners to take the song away, tucked into some fold in their mind.

While shuttling back and forth between solo sets and working with Truscinski in the States and in Europe, Gunn continues to write up new material suited for just him and a guitar. Although he seems most widely lauded for instrumental work, creeping songcraft pushes further and further into his albums. The forthcoming “Time Off” is gonna be filed under Gunn, but counts a full roster of support.

Truscinski’s along for the ride as is Gunn’s buddy, bassist Justin Tripp. There’s even a bit of a bucolic Velvet’s vibe courtesy of some droning cello on “Trailways Ramble.” But the guitarist professes a desire to broaden his songwriting skills, instead of chasing shining paths down a raga-sized hole.

“It’s always something I’ve been dabbling in,” Gunn says of the pending album’s dedication to proper songs as opposed to instrumental improvisation. “This record happened so naturally.”

“Time Off” doesn’t have a lackadaisical feel, although the widening row of Gunn’s musical predilections disallows for total cohesion. A subdued ecstatic vibe wafts off the whole thing, maybe because Gunn’s had the good sense to surround himself with old friends and not get stumped by relative underground acclaim.

“I try not to do something general—like a guy with a guitar,” he says. “I’m always pulled in separate directions, musically. …I’m interested in being a better player. I’m not trying to do just one thing with the instrument.”

[…] He tries to keep these projects seperate, but it sometimes gets complicated he explains in an interview with New City Music: “It bleeds into one another, sometimes […]