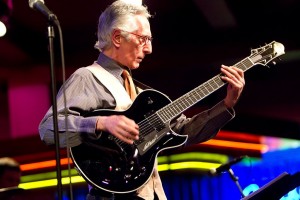 Guitarist Pat Martino’s made a concerted effort to traipse through life in the most healthy way he can. In part, it’s to combat the effects of an aneurysm, which swiped a huge chunk of his memory toward the tail end of the 1970s. But speaking over the phone from his home in Philadelphia, coughing interrupts the sixty-eight-year-old jazzbo’s insights.

Avoiding the flu this winter has presented itself as a difficult proposition. Even adhering to a yoga regimen and a diet consisting mostly of fruits and vegetables doesn’t always get it.

“There are times when I’ll fast for two days,” Martino says of efforts to retain a healthful lifestyle, adding that he prefers to perform on an empty stomach.

Touring doesn’t always enable him to feast on his favorite greens, but like the music Martino’s engaged with there’s a fluidity to daily habits. He doesn’t expect to be presented with what he desires regularly, so like an empathetic ensemble player, he adapts.

“The more encased it is as expectation and ritual and appointment—it’s difficult to keep the natural spontaneity and flow when it’s hampered by such things,” Martino says as much about dietary habits as music.

His oeuvre doesn’t disregard tradition or even recognizable melody as contemporaries like Sonny Sharrock would, but strives for an intense calm. Occasionally meditative, sometimes flamboyant, Martino uses the guitar as an instrument to express his experience from moment to moment.

An indulgent fusion effort like the 1976 “Joyous Lake” came about because of the time it was performed as much as the guitarist’s desire to jam heavy over synthesizers. It’s a contrast to earlier works like “Baiyina,” boasting tracks like “Where Love’s a Grown-Up God.” Stretching out over sitar droning, Martino’s band pulls in funky drumming and stone-heavy bass, punctuated by bursts of flute. Having such a distinguished groove established enables the guitarist to voice unending melodic ideas while bending those thick-gauge strings to their collective limit.

Martino’s musical diversity can be seen as acclimatizing to surroundings and not simply adapting other players’ derivations. He frames a career, which stretches back to the 1950s, as attentive improvisation.

“Jazz, to me, is another word for spontaneity,” Martino says. “[It’s] the ability to walk out your front door with an envelope you want to put in a mailbox, and if you have enough time, you don’t have to go where you know that mailbox is. You can make a left turn instead of a right turn and go for a walk in the sunlight. And when you see a mailbox, you can drop it in.”

Expressing an attitude diametrically opposed to the music biz, Martino expertly applies his bodhisattva-mind tricks to the industry he’s worked in throughout the majority of his life. Removed from the tensions of New York City, where Martino lived for about twenty-five years, remaining an intrinsic part of his hometown’s jazz landscape has enabled the guitarist to not only collaborate with the Roots’ Questlove in the Philadelphia Experiment, but to maintain a healthy outlook on the monetary side of his career.

It’s perhaps due to the fact that jazz isn’t a popular music—and hasn’t been for decades—that Martino purposefully buffers himself from the more mundane half of being a professional musician.

“I’ve never really locked into participation with regard to the ritualistic nature of the music business,” he says, discussing DownBeat magazine appointing him Guitar Player of the Year a few years back. “That includes criticism, that includes record releases and distribution and promotion. …For me to get involved in the outward manifestations of [music] that have nothing to do with my personal endeavors and has everything to do with sales… it’s foolish for me to even pay attention, and it’s interruptive to the creative flow and continuity.”

Detachment from those worldly concerns pushed back on Martino while scavenging for his guitar acumen as he recovered from the aneurysm that sidelined him for about a decade. His last recording prior to illness was a prescient 1977 disc titled “Exit,” featuring a batch of tunes showcasing Martino’s infatuation with guitarist Wes Montgomery. The album was followed by 1987’s “The Return.” And while most folks would assume recommitting to music would require the guitarist to comb over his previous work, Martino ignored it, figuring his aptitude was innate—like how we breathe or wander down the street toward that mailbox.

“I got back to the instrument like a child to a toy,” he says. “It had nothing to do with my past, it had nothing to do with something that no longer existed. …I was much more interested in the utility of the utensil itself, the utensil being the guitar. I used it to be able to take my mind off the devastation that recovery was projecting into me.”

The healing jive Martino espouses might be slotted into all that righteous living he’s after. But hearing him bend notes alongside John Handy on the 1967 “New View” and discovering the same emotive tendencies propel more recent live recordings like “Undeniable” means he’s probably right about music. So, who knows what else Martino’s figured out that Western thinkers haven’t?

He’s still got that stubborn cold, though.