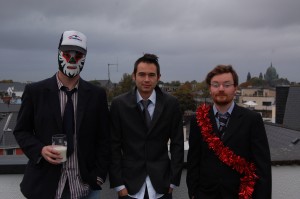 Being able to maintain punk’s enthusiasm and jittery charm while inserting a bit of harmony is a unique ability only a handful of groups have been able to achieve over the last few decades—Alabama’s Thomas Function recently hit the fever pitch before disappearing. At about the same time those Southerners properly channeled Elvis Costello, an Irish guy named Brian Kelly, who was then living in South Korea, started sputtering out pop-heavy punk gems and eventually wound up issuing a few discs for Tic Tac Totally. Amid everyone within reach of a computer staring glassy-eyed at screeds about the importance of lo-fi, Kelly’s So Cow released a self-titled long player that easily towered over the masses of garageniks, toning it down just enough to be poppy. A few years later, no one mutters word one about lo-fi and certainly, no self-respecting band tags itself with the name. So Cow had the misfortune of being lumped in with all those also-rans, but has continued to explode the confluence of sweet and tart musics. “Dunno,” from his 2011 “Meaningless Friendly,” bristles with a sixties pop melody and all the “ohh hoos” suitable for a two-minute song. Bounding between that sense of radio-friendly songcraft and compositions represented on the newly issued twelve-inch’ split with Squarehead, another group of Irish gentlemen, reinforces So Cow’s ties to more aggressive musics. “Ruane vs. the A-Bomb” doesn’t run a full minute and sounds like a cut from an early eighties SoCal punk band more than anything related to Kelly’s earliest efforts. Of course, the same sense of simplicity’s there, it’s just submerged in a speedy delivery. Given that most recent spate of songs, opening for Baltimore’s spazzy duo Weekends makes a bit of sense. But So Cow should probably be atop the bill. (Dave Cantor)