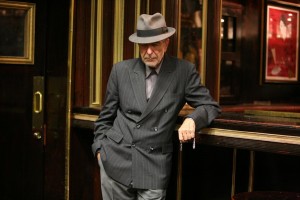 All the literary attention Leonard Cohen’s garnered before and during his music career contribute to the shaggy allure trudging along behind the Canadian-born singer and writer. His raspy, hushed singing has always served to distinguish the guy—even from Bob Dylan’s croaking. What’s weird, though, is that Cohen’s issued more work in the last two decades than during his “classic” period in the 1960s and 1970s. Partially, that seems to be a function of troubling financial scenarios doggin’ the singer. But even if Cohen weren’t necessitated to issue new works, there’s still that outpouring of thought he’d need to take care of—he’s a writer, after all. So, hoofin’ it through Chicago without a brand new album to hawk is a bit surprising. And it’s not. The songs comprising “Old Ideas” warrant a twelve-month period to simmer, and Cohen has no doubt rethought the performances of his works, interpreting them anew after each experience on the road. There’s not a musical revelation to be witnessed, but talk-singing for almost eight minutes is still pretty impressive. “Amen” could be a ringer for all of Tom Waits’ career. And with that minor-key violin, the music takes on a more religiously sinister vibe than anything else on the disc. Cohen’s involvement in religion—Judaism and Buddhism, specifically—jut out at places over the album. But “Old Ideas” is really an amalgam of Cohen’s thinking on just about everything. In addition to all the love and religion stuff, he gets in a good bit of reflection, asking “Could you hate me less?” And on “Crazy to Love You,” the singer examines the perils of thinking you’ve found what you’ve been looking for, only to find out you were wrong… again. Some of the backing vocals and the odd keyboard detract from Cohen’s wary baritone. But the guy’s almost eighty, so cut him some slack. (Dave Cantor)