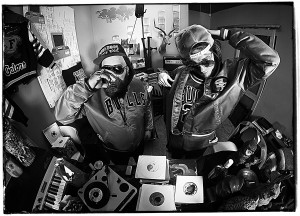 Every Sunday, DJs Esteban La Groue and Dave Mata lug a sizable chunk of their record collection, packed in a dozen or so crates and backpacks, to The Owl in Logan Square. They are the Impala Sound Champions, spinning six hours of vinyl, including soul, boogie, rap classics, reggae and rock ‘n’ roll. On a Friday or Saturday night, their selection would have any dance floor packed and sweaty. Sundays bring a more relaxed atmosphere, but not without a healthy dance floor.

Last month marked the first night in a new monthly mixtape series wherein Impala Sound Champions is featuring DJs from other cities. Prior to their guest appearance, each DJ compiles a two-sided mixtape cassette to be duplicated and given away to twenty early attendees. DJ Akalepse made the voyage from Brooklyn for the premiere of his mixtape “Stop the World/Truth and Soul,” which featured cover art by Chicago graffiti artist Slang. While the tape granted some lucky patrons a little piece of DJ Akalepse to keep here in Chicago, they also copped a small original illustration by the artist famed for his El train mural honoring the life of Mayor Harold Washington when he passed back in 1987.

Interestingly enough, the entire mixtape assembly takes place in the Owl’s basement. The inserts are screen prints made with help from one of the bar’s managers, Aaron Dexter. While only twenty tapes are given away, a hundred are made. Mata got his hands on a few working Telex 4000 cassette duplicators. Back when homemade mixtapes were a common American practice, these babies, the width and weight of a stovetop, were cutting-edge technology able to copy twenty tapes at sixteen times the speed of conventional recorders, and handled both sides simultaneously. 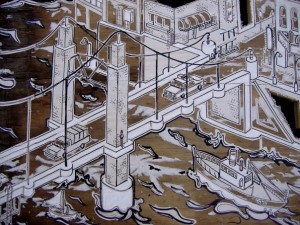 The series returns on St. Patrick’s Day with DJ Natasha Diggs from New York City. She is known for her turntablism abilities as one of a few daring enough to scratch on forty-fives. In Manhattan she spins weekly at The Bowery Electric and appears monthly on Scratch Vision TV, a video blog put out by EPMD’s DJ Scratch. Her mixtape cover design is by Forgive Yourself, who began his career bombing the Red, Purple and Yellow Lines in 1993. Though his work is most often seen as fast-handed lettering on walls and walkways of this concrete city, his Sharpie and pencil sketches are a benevolent homage to cities themselves. Cityscapes of tall buildings, roads, rail and waterways are drawn with meticulous detail from the grated vents at the tops of factories to the grooves of the staircase handrail. Side A of this tape and others can be streamed on SoundCloud.com under the Impala Sound Champion’s page. Tapes are not available for purchase, and the remaining eighty go home with the guest DJ. (Jessica Burg)