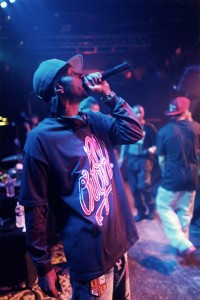 Despite most of G-funk’s primary proponents disappearing—when was the last time anyone heard from Battlecat?—or simply moving on and adapting, a handful of recordings from the 1990s still stand up. Bone Thugs-n-Harmony’s early efforts rank among that memorable clutch of albums. And while jail and line-up changes have kept the ensemble from fulfilling its early promise, Bone remains a unique brand in hip-hop. Shepherded to stardom by N.W.A.’s Eazy E, the group cultivated an approach to rapping that incorporated harmonized choruses that in lesser hands would relegate its recordings to the adult-contemporary bin. What’s commonly glossed over, though, is the fact that Los Angeles’ Project Blowed was mining similar vocal territory, deciding to eschew street-level hyperbole for abstraction and innovation. Some of those folks are still kicking around, but none with platinum albums to their names. Regardless of contemporary similarities, an accidental outgrowth of Bone’s first recording is proof of Eazy E’s middling skills on the mic. Set aside the Clevelanders on “Foe tha Love of Money,” a track coming toward the end of 1993’s “Creepin’ on ah Come Up,” the Ruthless Records exec turns in the track’s least-engaging verse, not to mention the slowest. Of course, pacing, not speed makes for notable appearance. But each Bone MC was capable of both while including the surprising, plaintive doo-wop on “Me Killa” from the group’s “E. 1999 Eternal.” The disc, which includes Bone’s most commercially successful works, was a high-water mark before G-funk began to subside. Returning sporadically over the last fifteen years has yielded a few efforts impacting the charts, but nothing as ethereal as “Mr. Ouija” and its sequel. With the lineup swollen back to its original quintet, those harmonies are likely to sound as round as they did twenty years ago. And who knows if a few more hits are poised for release on Bones’ forthcoming “The Art of War: World War III.” (Dave Cantor)