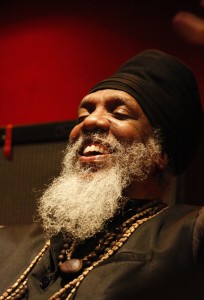 The perception of Lonnie Smith as an organ deviant stems from a variety of career choices. Being plucked up outta Buffalo by guitarist George Benson and incorporated into his funky quartet, Smith came to prominence amid the bandleader’s combination of swing and grace. Of course, the sporadic covers worked up by the quartet, including “All of Me” from 1966’s “The George Benson Cookbook,” made for some shoddy territory. And while Smith hasn’t taken to the mic to regale listeners with favored lyrical numbers, he has laid into “Sunshine Superman.” Wading into popular music didn’t relegate “Boogaloo” Joe Jones or “Groove” Holmes to lesser-known status, but the industry’s constraints weighed on Smith, stifling his ability to move beyond genre limitations his early career helped define. From the mid-1960s through the following decade, Smith released visually and aurally singular works—his “Think!” remaining one of the strikingly designed Blue Note albums of the era. Working to push past his jazzier inclinations as intoned on the greasy 1967 “Finger-lickin’ Good,” Smith moved toward a more worldly take on the genre with “Afro-Desia.” Percussion dominates the album as Smith jams atop contributions from Ron Carter and Joe Lovano. Occasional vocals complicate “All in My Mind,” but Smith’s willingness to expand his palette more than a decade into his career was an admirable thing. Audiences didn’t necessarily agree, sending the organist into semi-retirement until he re-emerged in the 1990s, issuing almost ten albums to date. Donning a turban, as depicted on the 1977 “Funk Reaction” and persisting through his most recent, “The Healer,” makes Smith an enduring personality, if nothing else. Swinging as hard as Soulive on the ten-minute “Beehive” points to his undiminished talents, not to mention a devotion to the organ’s development over the last six decades. (Dave Cantor)