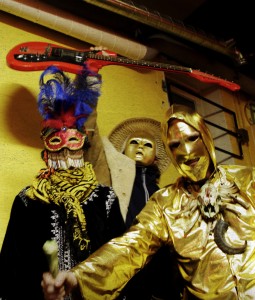 The greatest myths are good stories. And tales behind the discovery of any band are just decent fiction—or at least realities tweaked well enough to conjure up towering imagery.

Sweden’s Goat isn’t issuing its Stateside debut because of outstanding European festival performances but rather because a band it shares practice space with just shot a video over to Chris Reeder, UK’s Rocket Recordings honcho, and he dug it. That’s only part of the story, though.

“Over the course of the next few months when we were putting the seven-inch together, the band themselves started communicating with us,” Reeder says about his earliest digital interactions with the Swedes. “Then we didn’t really hear anything else from them until about May … when out of the blue ‘World Music,’ all finished and mastered, landed in our inbox.”

Without having a personal connection to the music and its performers, Reeder issued “World Music” late last year in Europe. The album’s gained traction in the digital world, spawning positive reviews, a few features on Quietus and prompting a release in the U.S. The music isn’t radical—all funky psych backdrops and torrential wah-wah guitar solos. Combine that with a chiaroscuro biography, though, and the band’s on its way to infamy.

Goat’s not traveled broadly as an ensemble and no one actually knows who’s in the group. Performing in masks and using pseudonyms keeps the amorphous band an anonymous spectre, hailing from some romantic village in the north of Sweden with a reported population of about 500. Coming from such an insular place—and having a unique cultural background—necessitates a healthy skepticism for the origin story.

“The people of Goat who are part of our history [maintain] a very close bond … Our souls are always connected through deeper insights and … with the forefathers of our collective,” the group’s sax player writes in an email correspondence.

He demures at revealing his identity and asks to be referred to as Björn Ulvaeus in print—and yes, that’s the name of the dude in ABBA.

Björn frequently refers to “the commune” in his responses to questions, but says living arrangements there are the same as everywhere else—it’s not a collective space, just a significant bond through a shared religious past. An overwhelming reverence for the commune’s elders remains apparent while he comments on iterations of Goat stretching back at least a generation and hints at some hierarchical order.

“Sometimes stuff happens that we need to discuss with the whole commune,” Björn explains. “And … there are people of the commune that have asked us not to talk more about the religious part of our history, since they want to exercise their beliefs far away from the eyes of the world.”

The obscured identities, non-descript religion and superfluous reference to folks who need to be consulted prior to decisions being made ring out cultish implications. Removed from daily, direct contact with superiors, it’s curious that Goat’s scheduled for a brief U.S. tour, including a set at the Austin Psych Fest.

It’d be easy to understand the coming performances as proselytizing, and who knows what sort of abstruse, benevolent vibes are gonna be wavering through the air. But Björn attempts to differentiate between devotional implications and playing in a band. “The music is the important thing, we have no need for self-affirmation and don’t want to be recognized anywhere,” he says, explaining desire for obscurity. “We think that music becomes more pure and therefore easier to appreciate … when not connected to individuals performing it. … The collective is the important thing, the [band’s] members are not.”

Before recording “World Music,” Goat had existed in some malleable form for several decades—and maybe there’s proof. Björn doesn’t explain anything in-depth, but says archival recordings from earlier lineups could eventually be released. It sounds like unearthing desiccated Amon Düül. Whether tangible or not, those tapes again beg the question, how real is any of this? 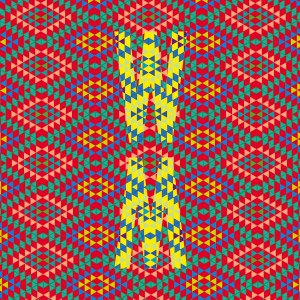 Goat’s ornamented origin story can’t be verified through connections with the outside world—there really aren’t any. Reeder doesn’t know these folks, the band that tipped him off to Goat isn’t swift about responding to email inquiries and making contact with the band’s mouthpiece was arranged through a PR representative. The mounting myth, though, doesn’t seem much different than Robert Johnson exchanging his soul for guitar acumen or Led Zeppelin performing twisted rites on female groupies. Tumescent meaning can emerge from a connection to a performer’s background. But Goat’s music’s forceful enough—if not original—to enthrall listeners.

After three minutes of Black Merda-styled groove, “Goathead” dissolves into pastoral finger-picked guitar with the sound of waves lapping up against some Nordic shore. Imagination spawns this music. As the guitar fades, those waves begin to sound a bit ominous, and “Disco Fever” kicks in—all Afrobeat and slinky with hand drums furthering the layered kaleidoscope of culture making “World Music” what it is.

That “Disco Fever” and its lyrics seem concerned with everyone on Earth being drawn to the dance floor is perhaps subservient to the rhetoric it uses—a Scandinavian equanimity emerges from simple lines like “People get ready/Under the rainbow.” It’s not Friedrich Engels, but it shouldn’t be. It’s rock ‘n’ roll.

“I really can´t remember [how many people played on the album],” Björn says. “It’s all very loose, and we don’t know how many are actually part of Goat. When conducting rituals in the commune … it can be thirty-to-forty people playing at the same time.”

Stateside shows, he says, are set to include only seven performers.

An uncertainty, and uncaring, about what Goat’s bound for doesn’t seem to be a put-on. But it could be. There’s apparently no grand plan to unfurl. And the desire for recognition, fame or money doesn’t enter into Björn’s remarks unless prompted.

“How big we want this to become is a question which we really don’t have an answer for yet,” he says. “I guess that as soon as we feel that this can’t be controlled anymore we quit playing live, releasing records and just go back to our ordinary lives.”

At least, that’s what some guy wrote in an email.