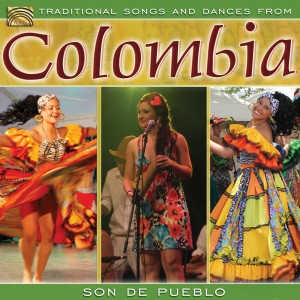 Colombian pop music is well known in alternative circles thanks to the efforts of bands like Aterciopelados or individual performers like Juanes or Shakira, but the country’s traditional sounds are not as widespread, and are often confused with the ubiquitous Andean music that is played on the streets of many major American cities.

This new release from Son de Pueblo is a great document of the various musical styles played around the country, and they run the gamut from cumbias, salsas and charangas (to name a few). Their arrangements are not at all dated; for instance, “La Cumbia Cienaguera”  blends traditional percussive instruments with a very funky electric bass and electric piano, and “Moliendo Café”  showcases the classical and jazz influences among the band members—the track begins with a Villa-Lobos-inflected flute intro that is followed by an intricate piano solo.

Most of the songs have a lively, dance-friendly rhythm that keeps you moving even if you are not familiar with this kind of music. (Ernest Barteldes)