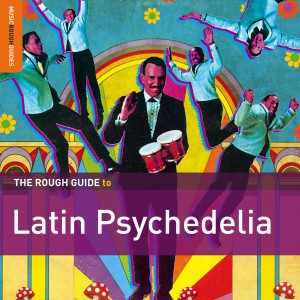 Latin psychedelics are currently enjoying a revival thanks to the efforts of current bands like Grupo Fantasma and Brooklyn’s Chicha Libre, who have both rediscovered this music (the latter’s leader, Olivier Conan, reportedly stumbled into the genre during a trip to Peru), but sadly a precious few of these artists are known Stateside. This is partially remedied by this collection from the Rough Guides, which brings us some of the prominent groups of the time alongside some of their contemporary followers.

The music is very varied, going from Spiteri’s proto-punk “Campesina,” a tune that blends distorted guitars with salsa beats. Salsa legend Johnny Rivera appears with “Cloud Nine,” an early track recorded with Tequila Brass. The mid-tempo track has very suggestive lyrics that playfully talk about “getting high” while “taking care of business”—whatever that might mean. Many of the groups on the record were clearly inspired by Santana, and that is evident by Wild Wind’s “A Drink or Two “and Conjunto El Opio’s “Piratas en El Titicaca.” Current groups are well represented by Chicha Libre, who makes an appearance with “Number 17” and Ocote Soul Sounds’ “En El Temblor.”

This album is great both for newbies who want to know more about the genre and also fans who have had a hard time looking for these tracks—which makes it highly recommended. (Ernest Barteldes)