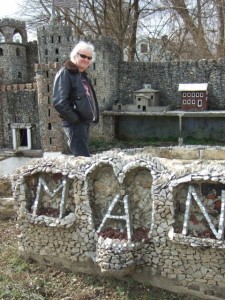 As suburban sprawl began its duplicitous creep, a kid named Mike Hummel and his family took up residence in Timberlake, a region southwest of Ohio’s capital. It was the 1960s.

Hummel, better known to scum punk collectors as the titular character of Mike Rep & the Quotas, stuck it out in a place he refers to as nowhere a few times in emails and over the phone. But if it weren’t for Timberlake and his parent’s affinity for R&B and 1950s rock ‘n’ roll, the character of Columbus’ musical topography would waver differently all these years later.

In addition to his family’s good sense, though, Rep reveled in a friendship that would wind up spanning decades and countless bands.

“When ‘Israelites’ came out on AM radio, it was a Top 40 hit in America,” Rep reminisces. “To us, it just sounded like a weird take on R&B. … The first time I met Tommy Jay was at a basketball court near where we lived, and we discovered it was both of our favorite song on the radio at the time.”

The Desmond Dekker classic seems like an odd way for guys inextricably tied to the rock world to bond. But radio’s importance to Rep’s artistic sensibility can’t be minimized.

As a lifeline to culture, the airwaves once served to enliven drab childhoods and functioned as a window onto creative lives flitting around in sublime cities hundreds of miles away. The nightly companionship of crisp voices beamed down on Rep and provided him with a sense of adventure.

“I’d go to bed every night with a transistor radio underneath my pillow,” he says. “We had a fairly progressive AM station in 1969 … hearing everything from the Ohio Express to the Plastic Ono Band. It was crazy—and wonderful. ”

Those tunes along with Tommy Jay accompanied Rep to the Ohio State University campus a few years later. The pair were straight, apart from guzzling beer, Rep says, but he soon discovered the joys of dope smoking. And concert going. The duo found opportunities to catch everyone from Hawkwind to Lou Reed, and Iggy Pop and David Bowie. It was the 1970s.

The music whizzing around Rep and Tommy Jay eventually found itself synthesized in scores of recordings—the overwhelming majority of which remain unreleased. What got set to tape during those formative explorations didn’t become immediately available. And when “Rocket to Nowhere” showed up in 1977, it seemed like no one was listening.

“We were more influenced by our isolation than by being part of a scene, pre-’78,” the multi-instrumentalist says of his first few years tinkering with recorded songcraft.

Rep, though, was undeterred and continued recording at a prodigious rate, woodshedding in basements, goofing off with his friends but only emerging later in the decade as a member of the True Believers—a group orchestrated by Tommy Jay.

The band issued its lone recording, “Accept It” on Rep’s fledgling New Age imprint. It was 1980. The three songs toss off a surprising range of music, considering the players seemed wrapped up in punk concerns. Even the title track reveals a gentle melodicism alongside the genre’s quick pacings.

Rep, again deferring to Tommy Jay’s talents, says the album ranks as an UR-recording and that his companion’s recognition is usually glossed over by virtue of the Quotas using Rep’s surname.

By the time the True Believers were kicking around, though, Rep says a concerted scene had begun to coalesce around groups like Ron House’s Twisted Shouts and Jim Shepard’s Vertical Slit. There were even a few venues daring enough to host performances. Rep and Tommy Jay persisted, this new enclave serving as proof that what they were blindly pursuing had pent-up meaning. And someone cared, somewhere.

Constantly rolling tape, catching the nuances of teen- and twenty-something angst wasn’t reserved for just this close-knit constituency. Instead, Rep and Tommy Jay wrangled Columbus acts they felt needed to be immortalized. Screaming Urge would probably have gone unnoticed without the pair’s talents—and eventually a latter wave of mid-Ohio bands, including Thomas Jefferson Slave Apartments, New Bomb Turks and Gaunt could have gone without renown.

“Tommy doesn’t get a lot of credit,” Rep says. “But he’s an important part of getting those bands recorded.”

Coinciding with that latter coterie of talent, Rep says he hit his stride after leaving off his wastrel tendencies.

“We did tend to leave our best playing in the basement and not on the stage,” he says. “We’d party too much—especially during shows. Insecurity, on my part at least, was a lot of what was behind it in retrospect. … The change didn’t start to come until the nineties, and especially when the Quotas reformed in 2004. We wanted to be at the top of our game.”

With the flurry of rock stuff emerging from Columbus, and Rep’s rechristened OldAgeNoAge label serving as a platform, his earlier work garnered attention from folks at Siltbreeze, who eventually mustered “Stupor Hiatus, Vol. 2,” credited to Mike Rep & the Quotas, in 1992. Unfortunately, the Quotas weren’t a functional band—Rep recorded a slew of tracks on his own. But the attention created a necessity to figure it out on stage, again.

With Rep’s reputation staked to “Stupor Hiatus” and one of his earliest recorded songs, “Rocket to Nowhere,” the punk set is likely to snag tickets to Blackout Fest, hoping to hear loud, fast rules. It’s Rep’s history with Tommy Jay, though, that’s set to undergo a substantial exploration.

“Tommy Jay and I are performing songs from the ‘Grim-O Comix Sequence,’ ‘Tom’s Tall Tales of Trauma’ and ‘Stupor Hiatus’ in about equal proportions. … this is not a rock show,” Rep says of his first Chicago appearance in decades. “Call it DIY folk-punk, if you gotta have a label for it. … It’ll be a cross between a folk duo and Suicide.”