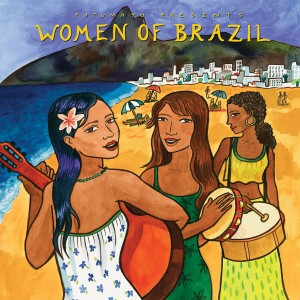 Those who expected this compilation to feature the likes of Marisa Monte, Gal Costa or even newer names like Bebel Gilberto or Cibelle will be disappointed at first—this release contains none of their songs. Instead, we are presented with few names ever heard Stateside save for Luisa Maita or Mart’nalia, who have regularly toured in the US. The disc opens with Italy-based Nossa Alma Canta’s “Bossanova,” a tune that remembers the Brazilian movement that swept the world with the help of Stan Getz and Charlie Byrd.  The tune name recalls many familiar hits like “Wave,” “Desafinado” while playing snippets of familiar tunes via instrumental interludes.

Sao Paulo-born Miriam Maria is featured with “Boi de Haxixe,” a catchy forró with a rock-inflected edge. Mart’nalia might be known for her uptempo sambas, but here she appears with the jazz-inflected ballad “Para Comigo,” a song marked by a beautiful fretless bass solo. Miriam Aida doesn’t hide her native Swedish accent on the “Por Causa de Você Meninha,” a track from her 2008 album “Meu Brasil.” Also notable is Flavia Coelho’s “A Foto,” a tune whose arrangement is reminiscent of the work of Nouvelle Vague—no surprise there, since the Rio-born singer has been living in France since she was fourteen. “Women of Brazil” is clearly not a compilation of oldies, but it definitely shows where the music is going to these days.  (Ernest Barteldes)