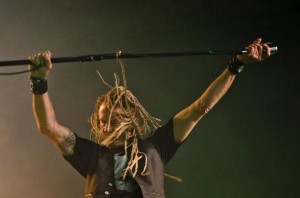 We can, and perhaps should, continue discussing the vital bridge between hardcore, whatever it turned into mid-decade and everything that happened in Seattle during the 1990s. And that’s where Milwaukee’s Die Kreuzen comes in. It took the band about two years to turn its 1982 demos into a debut long-player, released through Touch and Go. Issuing a hardcore album so deep into the genre’s development meant the disc would either be buried amid its doppelgangers or point a possible way beyond hardcore’s limitations. Dan Kubinski’s vocals may be the definitive feature allowing for folks to care about all this a few decades on. His determined yowl’s still more metal than Lars Ulrich and the trio backing him was capable of turning a fast tempo even faster. With the crossover implications becoming clear a few tracks into the band’s self-titled disc, the wave of noise that would subsume T&G rears up on the fifty-three-second “I’m Tired.” Its abandon’s matched by the following track’s investigation of quicksilver tempo changes and—you guessed correctly—more yelling. If nothing else, how Die Kreuzen fits a guitar solo in to “Not Anymore,” a fifty-seven-second song, is beyond comprehension. The effort didn’t pay off more than it did for any other mid-eighties act. What’s interesting, if not interesting to listen to, is that a couple tracks off the ensemble’s 1986 “October File” could pass for some cast-off and disavowed Jane’s Addiction. The album’s not void of worth—and again, an argument could be made that Die Kreuzen and folks like Hüsker Dü were pointing the direction toward broader acclaim—but its best moments still spring from a hardcore groundwork. “Imagine a Light” could have been included on the band’s earlier work, but instead breaks up the mid-tempo monotony of this latter disc. Kubinski, applying his voice to a wider range of hollering, comes off like a dude fit to front SSD. And as long as he can pull it off in 2013, gettin’ the band back together won’t seem like a bad idea. (Dave Cantor)