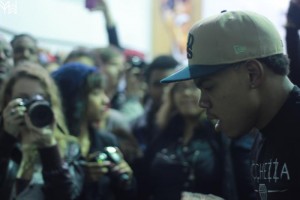 Chance the Rapper’s sophomore digi-release lets folks know he’s more than just “people with ideas.” He’s an emotive writer, a funny dude and a talented musician. And for what it’s worth, his new disc, “Acid Rap,” trumps most anything Chicago’s offered in the last few years. But what he’s left behind since issuing “#10Day” last year is a dynamic sense of composition. Lyrically, there’s no fall off—although Chance does break out that weird strangled croak a bit more often—but musically, the dusty sense of wonder’s been usurped. Everything’s slickly done and well produced. So, for those expecting thirteen tracks of De La Soul-inspired beats, it’s not here in the same volume. What Chance has replaced all that with is just about as entrancing, though. Beats are smooth, guests are plentiful—perhaps a bit too much—and the MC reflects on what he’s accomplished. The disc’s brimming with social commentary from an admittedly wacky figure and includes, perhaps, the most flippant recorded reference to Trayvon Martin on “Smoke Again.” Chance lets off the following: “Killin’ in the hood like Trayvon.” It’s barely half a couplet. But it’s the inverse of Public Enemy. There’s no lamenting the fact that some kid—roughly Chance’s age—got gunned down. He simply serves as a cultural marker, albeit a loaded one. Reasonably positive vibe pulse throughout “Acid Rap,” and as Chance wonder’s about how shit works, he asks, “What’s good gangstas/what’s good people?” on “Everybody’s Something.” The Chicago blues are something different person to person. But the teenage rapper’s “Interlude (That’s Love)” recognizes a universal truth. “What’s better than eatin’ is feedin’ your fam.” It’s difficult to balance what Chance discusses with the goofball character he falls back on, which is profoundly exaggerated alongside Action Bronson’s brooding lines. Contrasts displayed on the lysergic MC’s public face, though, are what keeps listeners anticipating another digi-disc—that and the affective phone call with his father closing out the affair. (Dave Cantor)