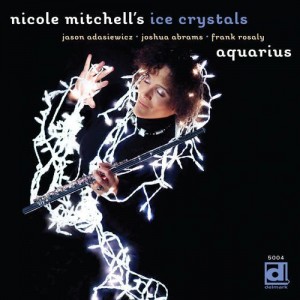 When the volcanotornadohurricaneearthquakeasteroidzombieinvasion finally hits, what will all the punks, metal-heads and DJs do without electricity? They will listen to jazz. It’ll take the apocalypse before the Association for the Advancement of Creative Musicians (AACM) will finally be recognized by the general populace for their seminal contributions to expression beyond electricity. The Chicago-based organization has been fostering exploratory talents since 1965, with big names and bold artists still challenging the reigning ideologies of contemporary music as steadfast as ever.

Much to her credit, Nicole Mitchell has spent a fair amount of time presiding over the organization. A fearless female instrumentalist in the midst of the modern jazz boys club, Mitchell’s first recording of 2013 finds the flautist revitalizing the form that put the AACM on the map. “Engraved in The Wind” (out on RogueArt) features sixteen lovely tracks of solo flute, wherein Mitchell proves her prowess by stretching the sound of her instrument in a dozen different ways. There are moments of atonal drone, points pierced by accidentals, times when it sounds like the flute is being split in two to deliver distinctive octaves of intimidating distance from one another. The sheer physicality of the instrument is brought to life through her playing. And playful she is. Perhaps the greatest contribution of her style is Mitchell’s willingness to trade off playing and singing. Listen carefully and you will encounter moments of indistinguishability between the sound emanating from her mouth and from the instrument, as though the human voice were capable of a flute’s sweet serenade.

Despite her willingness to experiment with sound, a romanticism buoys all the melodies on the disc. Thus it is tempting to consider her second album of 2013, “Aquarius” (out on Delmark), under the same guise. Joined here by Chicago mainstays Jason Adasiewicz, Joshua Abrams and Frank Rosaly, as Nicole Mitchell’s Ice Crystals, the tunes on first listen sound hackneyed, like Playboy After Dark Starbucks Jazz. And so it becomes clear that it is a mistake to go into the recording with the expectations that her distinctive solo effort yields.

A more generous listen opens up the treasures of the disc. Replacing the sound of her voice with the syncopation of Adasiewicz’s vibraphone is a welcome addition to her melodic tendencies. It effectively opens up a flip-side to her romanticism, one that sideman Adasiewicz has routinely proven to be deftly graceful at honing in, often at the expense of the band leader’s focal point. He did something similar with this year’s “Skull Sessions” (out on Cuneiform) by the Rob Mazurek Octet, on which Mitchell is also a featured player, wherein Adasiewicz simply steals the show.

To be sure, there’s enough variation on Nicole Mitchell’s Ice Crystals’ debut to keep the audience engaged, and quite often the set rises above banal modal traditionalism to the heights of a deeply enriched rejuvenation of cool. And yet the group shows that ice isn’t just cool, it’s also hard. The effect of Abrams’ and Rosaly’s intricate rhythms cannot be understated, even though their playing often is. Hell, a track here, “Adaptability,” even goes as far as to incorporate tasteful dub effects. Eat your heart out, Don Cherry. (Kenneth Preski)