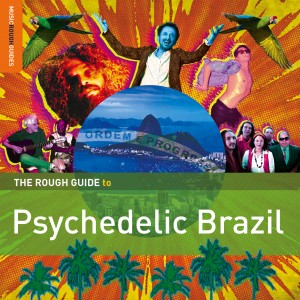 When the Beatles, the Stones and The Beach Boys started to spread the seeds of drug-addled psychedelics in the music scene in the late sixties, their influence reached musicians in South America, who reshaped and repurposed the music they heard to make it their own. One of the best-known examples of this is “Tropicalia,” a 1968 album that featured Caetano Veloso, Gal Costa, Gilberto Gil, Os Mutantes, Tom Ze and Nara Leao. That disc launched a groundbreaking multimedia movement that resonates to this day. Sadly, there are no tracks from that album on this interesting compilation that brings together both well-known and obscure Brazilian musicians who took on the genre and mixed it with various other sounds. Many of the tracks are rare, like “Sorriso Selvagem,” a 1966 track from The Gentlemen, a northeastern Brazilian band that disappeared without a trace but that included Ze Ramalho, a highly respected artist from that country.

Highlights from the album are “Um Lugar do Caralho,” a song by contemporary psychedelic singer-songwriter Jupiter Maça (also known as Jupiter Apple), whose lyrics speak of the need to find a “fucking great place” where he can meet people who can “drink, talk and live in excess.” Original psych-rock icon Tom Ze appears on “Revolta Queto-Xamba 1832,” a cacophony of electronic sounds scored to a forró beat, and “O Jarro,” an Indian-inspired tune from former Novos Baianos vocalist Baby do Brasil (formerly Baby Consuelo). This digital-only release also features a full album from Maça, who has since moved on from psychedelics to explore different sounds.

Unfortunately, this album misses more than it showcases. There is nothing from Novos Baianos, Secos & Molhados or Raul Seixas—all musicians who used the whole psychedelic thing to create great music during the seventies. Sure, it gives newbies an idea of what psychedelics are in Brazil even today, but it feels incomplete by the aforementioned omissions.  (Ernest Barteldes)