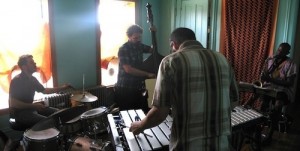 A sad sack of stereotypes plagues jazz from popular listening. Rumor dictates that one must know the history of the genre to enjoy it. That one must have a knack for abstraction to understand it. That modern players are just phonies putting us on in the name of pseudo-art too high for anyone to reach. Chicago may be a proud city, but 2013’s best local album is import-only from France, and took nearly three years to be released at all.

On “Unknown Known” (out on RogueArt), The Joshua Abrams Quartet offers a counterproposal to popular myth. In six streamlined tracks, the group thwarts the blather with tune after tune of graceful improvisation. Showcasing the city’s most underrated bandleader, Abrams anchors the set on double bass, generous with his guidance, giving David Boykin, Jason Adasiewicz and Frank Rosaly ample room to maneuver. The tracks breathe. The effect is visceral. The listener is lulled into leaving behind abstractions in favor of distilled beauty.

It takes a song and a half of free-form chamber music before the quartet truly exhales. Aided by vibraphonist Adasiewicz’s airy ambiance, the five-minute mark of “Boom Goes The Moon” swims in Boykin’s sax sustain, while Rosaly and Abrams delightfully cradle the melody. The dynamism of the players on this disc is remarkable for a genre bridled by soloists. Abrams has a proven wisdom for placement, and his choice to employ the double bass warmly grounds the recording for his accompanists. Something singular to this release then, a jazz band that actually sounds like a band.

The deep grooves continue on the next two tracks, both of which would be ripe for the picking had A Tribe Called Quest not called it quits. On “Leavening,” the sound of jazz gone folk abounds as Abrams channels the spirit of cellist Abdul Wadud’s work on Julius Hemphill’s “Dogon A.D.,” bowing his bass with a masterful touch as Rosaly’s percussion peppers in and out of existence. The set finishes up with “Pool,” a hard bop jam that wouldn’t sound out of place on Coltrane’s “Giant Steps.” A delectable treat to end a delicious meal. (Kenneth Preski)