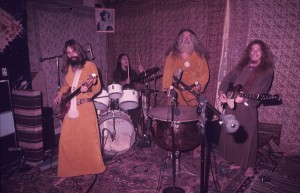 Perched atop one of the highest points in California, Djin Aquarian remains a figure wedged into the country’s history of out-music and social experiments. Neither defines him, but both contribute to the aura surrounding a communal, religious group called the Source Family he was a member of in the seventies. Thirty-six years later, the views and practices espoused by its god-head, Father Yod, make most middle-Americans squeamish. At the time this all went down, the Family must have been at least a little terrifying.

“We worked and lived in [this world],” Djin says. “But on the other hand, we were very different. … We had sex differently, we ate differently. … we sealed ourselves off … didn’t go out of the Family and kept growing through that.”

The Source Family, helmed by a war-vet-turned-restaurateur with the given name Jim Baker, could be lumped into the miasma of 1960s social experiments. But there’s something else going on. Smoking weed was a ritual, but drugs weren’t a focus. They weren’t totally freed from monetary concerns—Baker’s Sunset Strip health-food eatery sustained them. It’s all curious—the reams of music they recorded as Ya Ho Wha 13 are, too. 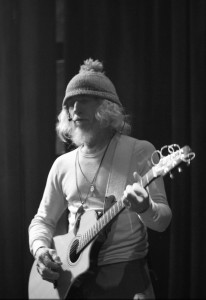 What hooked Jodi Wille, who along with Maria Demopoulos, directed “The Source Family” film, which documents a communal, eight-year existence, was that the group’s impetus had to do with forging new ways of living. And it was all helmed by Yod, a guy she describes as having lived several full lives.

“I’ve been obsessed with fringe religious groups and visionaries and extreme sociological behavior for many years,” she says, adding that she was raised in a rather strict Christian home. “I started visiting outsider artists all over the South. And that had an impact on the way I saw artists, but also individuals who contributed to our culture but were misunderstood. My work over the years has focused on that—forgotten history. Father Yod fits into the trajectory of my passions.”

But what first drew Wille to Yod’s experiment was a 1998 compendium of albums recorded in 1973 and 1974 called “God and Hair.” The sprawling thirteen-disc set presents an array of approaches Djin, Octavious, Sunflower, Yod and sundry Family members took to music. There’re composed songs, but what the ensemble might be best known for are its ecstatic improvisations.

“The first phase was letting us get our desires out by letting us do our rehearsed music,” Djin, the band’s guitarist, says of the frequent sessions—there’s reportedly about sixty albums worth of material. “It just dawned on [Yod] that there was a special kind of music that could be tapped into that was coming through the ether that we were capable of pulling in—it wasn’t crafted or preconceived, it was just channeled.”

Favoring the frenzy improvised music inspired, Yod coaxed the band into a lather, pounding a kettle drum, howling devotionals and chanting. He didn’t lead the band so much as attempt to conduct the chaos. Discordance, though, attracted new adherents several decades after the Family disbanded.

“It was mysterious stuff no one seemed to know the true origins of,” Chicago-based psych purveyor Steve Krakow, a.k.a. Plastic Crimewave, says of first hearing Ya Ho Wha 13. “Was it a cult? Who were these musicians? The story ended up being too good to be true.”

It’s folks like Krakow, who last year recorded “Save the World” with Djin, that have made the Family’s band an enduring commodity, but that’s not what the Wille’s documentary focuses on. 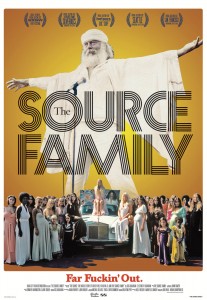 “The story of the Source Family is so much bigger than the music,” she says. “There were elements, to me, that were ultimately more important. As a storyteller, to make the film about the music instead of about Father Yod and what the Family went through would diminish the importance of the material.”

So, while the film’s a bit short on performance footage, viewers can catch Yod delivering a baby. And even the aftermath of a 1977 accident that would lead to his death was captured for posterity by a Family member. It’s all soundtracked with music wrenched from the swirling minds of folks some perceive to be cultists. But that can’t diminish what was set to tape.

Djin approves of the songs compiled and issued as the film’s soundtrack on Drag City Records. But as a disclaimer to those would-be viewers searching out electric shamans jamming impromptu, it’s not there. Lopping folk-rock with swelling choruses accompanies most of the film. But the lilting soundtrack jives with a documentary that reaches for the heart of a utopian dream. Maybe the pinnacle of human life on earth was obtained. Or Yod could have been a scammer. The truth’s at least a bit of what Family members perceive, though.

“It was like going to sleep in heaven and waking up on earth,” Djin says.