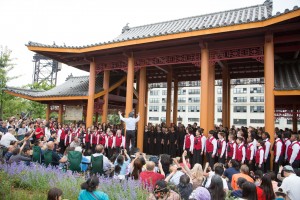 This is the third and final week of Riccardo Muti’s busy summer residency and the final week of the Chicago Symphony Orchestra’s 2012-13 season. As we have come to expect, Muti has been leading extraordinary performances with the CSO, including a rare and wonderful foray into Wagner last week.

One of the most fascinating aspects of the transition from the first week of Muti’s June residency, which featured principal horn Dale Clevenger struggling with the high horn parts of the Haydn “Maria Theresa” Symphony, to last week’s concerts, which featured assistant principal horn Daniel Gingrich taking over the horn calls for “Siegfried’s Rhine Journey,” was that Clevenger decided to retire a couple of weeks early in unannounced last appearances.

Hired as principal horn by then-CSO music director Jean Martinon in 1966, Clevenger valiantly led the CSO horn section through all of the Solti era and Barenboim years but his playing began deteriorating considerably after Barenboim left the CSO during the years when there was no music director to oversee personnel issues. That Clevenger finally came to see the wisdom of retiring on Muti’s watch is a remarkable coup for Muti, Clevenger, the orchestra and for area music lovers. 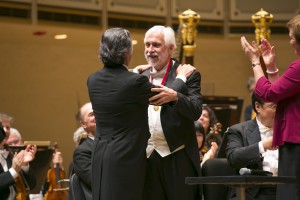 The Sunday before a closed-to-the-public and especially-to-critics last “donors appreciation” concert that had Clevenger appear with his CSO colleagues a final time to conduct some seventy of his colleagues and students over the years in a horn arrangement of the Adagietto from the Mahler Fifth Symphony, Clevenger appeared with his CSO brass colleagues on the boat the Leading Lady as the finale of the Rivers Festival. He conducted Gabrieli on the boat and also played while other colleagues conducted. Muti was on board and after the boat docked in Chinatown to a battery of brass pieces complete with Mayor Rahm Emanuel coming on board to greet Muti and the players, Muti then conducted the Chicago Children’s Choir in a double rendition of “Va, pensiero” from Verdi’s “Nabucco.”

The Friday before the secret Clevenger performance, Muti was hosting a pizza party for the Civic Orchestra, the training orchestra of the CSO, which he had led in two rehearsals of the Brahms Second Symphony back in April. The previous week, Muti had supervised the second international Chicago Symphony Orchestra Sir Georg Solti International Conducting Apprenticeship, whose judges included legendary mezzo-soprano Marilyn Horne. The winner was twenty-three-year old Matthew Aucoin.

Last Wednesday, Muti led a Q & A session with renewing subscribers and Saturday, received an honorary doctorate and received a standing ovation for giving the commencement address for the DePaul School of Music where he told graduates to “bring music and culture to people in need of healing and comfort.” Muti recalled his experience conducting a 1996 concert in Sarajevo after the end of its siege, noting that “what diplomacy could not do, music created.” Quoting Matthew 24:44, Muti encouraged the graduates to “be ready” to respond to their calling. “You have a mission… to use culture, music, and theater to bring people together.”

After the Friday, June 21 1:30pm matinee, Muti will do a public CD and book signing; patrons do not need to have Friday afternoon tickets to attend, which should take place after 3:30pm.

“The ‘Four Sacred Pieces’ are Verdi’s last composition,” Muti explains. “These are choral pieces, two are with orchestra, the ‘Stabat Mater’ and ‘Te Deum,’ the ‘Ave Maria’ and ‘Laudi alla Vergine Maria’ are a cappella and unusual.

“For the ‘Ave Maria,’ Verdi invented his own scale like Debussy or a twelve-tone row: this is not a scale you will find in any harmony textbook. This is very difficult because if you lose the sense of the tonality, you can start with Verdi and end with Shapey!

“ ‘Laudi alla Vergine Maria’ is for female chorus, but Verdi’s original idea was for four solo voices. We will do it with a small chorus of ladies. The text is one of the most metaphysical and theological texts of Dante’s ‘Divine Comedy,’ some of the highest concepts put to words by human minds. To do this as a composer, you are either crazy or a genius, thankfully, Verdi was a real genius. The piece speaks to the paradox of, if you are a mother, you cannot be a virgin. And you are the daughter of your son, because your son is God? He is God, but he is your son. But because he is God, you are the daughter of your son,” says Muti, tracing a cross while he does so. “To put this to music is impossible, but Verdi succeeded. This was his last composition, and Verdi did not want these pieces to be performed: he wrote them for himself.”

What Muti finds particularly interesting is what these pieces say about Verdi’s own religious faith. “Was Verdi a believer? Was he not? This is always an open question,” says Muti. “I think, of course, he hated the priests. But in all of his operas, except one or two, the end is always towards the heavens, or the sky that becomes blue, no? And you have this transcendent attitude or disposition. There is ambiguity there. It is like Benedict saying, ‘I feel weak physically and spiritually’ when he resigned. What does he mean? The fact that a pope says spiritually, I feel weak, means, seeing the church going so corrupt, you start to think, ‘Where are you, God? Where are you? Are you around, or not?’ This is why I have this photo on my desk,” says Muti, pointing to the famous photo of the Vatican being struck by lightning on the day that Benedict resigned. “You know, I showed this photo to [Dale] Clevenger on the day that he resigned.” (Dennis Polkow)