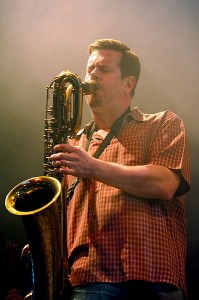 It is said that relationships work best when there is compromise. Kudos to Ken Vandermark then, who as co-curator of this year’s fifth annual Okka Fest, boldly culled a wild array of musicians as compelling and uncompromising as possible. Bound to be the summer’s most unique festival offering, Milwaukee-based free-jazz label Okka Disk promises a potent taste of distinctive talent spanning June 21-23, with Chicago players anchoring most performances.

Night one features three sets with three special collaborations. Beginning with a pair of progressive beboppers in Chicagoans Keefe Jackson on reeds and Fred Lonberg-Holm’s is-it-a-guitar-or-cello stylings, the two will be joined by Norwegian import Ståle Liavik-Solberg on drums. The equation yields a riddle: is it possible to be both minimalist and maximalist at the same time? The trio is followed by a duo entranced by texture. Nate Wooley plays space-aged trumpet with the aid of pedals and an amplifier and yet still somehow manages to sound like a caveman, while legendary Londoner Paul Lytton stretches the timbre of the drums for every penny’s worth. Capping the evening will be the jazz world’s most intriguing addition, Terrie Ex of legendary first-wave punk group The Ex. Coupled here with hometown heroes Dave Rempis and Tim Daisy on sax and drums respectively, the group will offer a peek at hard-fought composition, which stands as the calling card of this year’s Okka Fest, musicianship so far out that it fits right in.

All the festivities are scheduled to take place at craft-beer mecca The Sugar Maple, with the exception being the Saturday afternoon session when Ken Vandermark makes his debut, playing at The Maple’s smaller sister club The Palm Tavern with the most prestigious performer of the weekend, Joe McPhee. To crate-diggers, McPhee is well known as the saxophonist behind 1971’s “Nation Time,” a freewheeling funk jazz amalgam infused with black-power political flair. Since then McPhee has gone on to record dozens of albums, primarily with an aesthetician’s exploratory bend, but still remains a bit of an unknown legend, one ripe for reconsideration. Vandermark will heed the call with an upcoming release on Okka Disk featuring reinterpretations of McPhee compositions, and his accompaniment here will assuredly provide a welcome home to McPhee’s emotive leanings. If that isn’t enough, consider the ecstatic live dance accompaniment of Melaku Belay, leader of Ethiopia’s Fendika, a music and movement collaborative which will be featured in various configurations throughout the festival, most notably during the final two sets of the Saturday evening sessions back at The Sugar Maple, as well as Sunday’s closing set of the Okka Fest itself.

For the proud Chicagoan sadly resigned to a weekend jaunt to Milwaukee, the trip is made worthwhile by two sets in particular. Saturday evening will open with the PO Music-Harmolodic Trio, featuring Joe McPhee, Tortoise’s Jeff Parker on guitar, and local mainstay Joshua Abrams on bass. As if the incredibly deft billing isn’t compelling already, the trio’s plan is to perform the music of Ornette Coleman. (Question to the editor: how many exclamation points are fit to print?) Fittingly, the final day’s session will kick off with Vandermark’s most experimental outing, three/fourths of the group Lean Left, which features the guitarists of The Ex, represented here by Terrie Ex, and the well-honed interplay of Vandermark and long-time collaborator Paal Nilssen-Love on drums. The group is stubbornly committed to the sounds of something entirely new, pure-punk/free-jazz and it sounds nothing like either. It’s an astounding mix and vastly underrated, much like the Okka Fest itself. (Kenneth Preski)